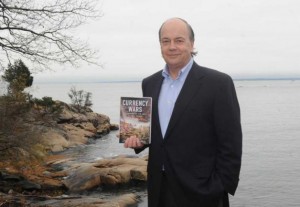 James Rickards, an American economist, lawyer and investment banker posted an opinionated article on Bitcoin detailing what he feels about the digital currency. He first explains what exactly Bitcoin is. He writes that the digital currency isn’t backed by anything just as how the dollar, which he feels is also digital, isn’t backed by anything. He explains,

“The overwhelming majority of dollar transactions, from credit cards to the government bond market are digital. Dollars emerge from and vanish into thin air — just like bitcoins.”

James Rickards continues on to write that the Federal Reserve print out dollars from computers. The difference with Bitcoin is that even though it too uses computer technology, it isn’t controlled by a government or central bank. Rickards explains that this isn’t strange because in 1999, Milton Friedman said that the internet would be of the major things that could reduce governments’ role.

“The one thing that’s missing, but will soon be developed, is a reliable e-cash, a method whereby … you can transfer funds from A to B without A knowing B.”

This in essence is Bitcoin, according to James Rickards.

Rickards continues his article by mentioning that the people who doubt Bitcoin quickly point to Mt.Gox’s failure for evidence that Bitcoin will soon fade out. However, they forget to mention that brokers who are regulated and do business with dollars “fail all the time.” Rickards mentions the Lehman Brothers company demise did not end the dollar. Likewise, fallen Bitcoin exchange Mt.Gox does not mean failure for Bitcoin. The other things skeptics point out is that Bitcoin is mostly used for criminal activity. However, those people fail to realize that dollars are also used for illegal activity.

“But dollars have been used for crime from Al Capone to Bernie Madoff. Again, the critics are confusing the currency with the uses to which it is put.”

Rickards continues by writing that if Bitcoin is so similar to the dollar then will Bitcoin rival it in value? This will not be the case since the IRS is taxing Bitcoin. Rickards explains,

“This is unlikely because the dollar has set a trap for bitcoin in the form of taxes. If you acquire a bitcoin for $100 and use it later to purchase $200 of goods, the IRS says you have a $100 gain on the sale of bitcoin that must be reported on your tax return.”

The other thing Rickards notes is that you can’t even pay taxes with Bitcoin since the dollar “has a monopoly as legal tender for the payment of U.S. taxes.” This means that the only reason why dollars are valued is because they are used to pay taxes, otherwise it’s jail time, according to Rickards.

James Rickards writes that Bitcoin has been very volatile as its price has gone from a dollar to over a thousand dollars. The dollar does increase and decrease depending on other currencies like the euros, but only by fraction of pennies.

Rikcards offers a solution to the Bitcoin volatility problem, he writes,

“One solution to the bitcoin volatility problem is to link bitcoin to gold at a fixed rate. This would require consensus in the bitcoin community and a sponsor willing to make a market in physical gold at the agreed value in bitcoin.”

Rickards explains that if Bitcoin is backed by gold it might even be able to challenge the dollar especially if it was supported by Russia and China. Concluding his article, Rickards writes that Bitcoin is not only a currency: it is,

“also an open-source technology that can facilitate cheap, secure, distributed processing for all kinds of property transfers including stocks, bonds and land titles.”

James Rickards mentions that even if Bitcoin the currency fades out, the technology behind the virtual currency may survive. He writes that the future of Bitcoin is its position of being a tech platform for cheap transactions rather than being a currency. Rickards finishes his article by writing that Bitcoin as a currency is “an interesting, if risky, experiment. Just don’t try paying your taxes with it.”