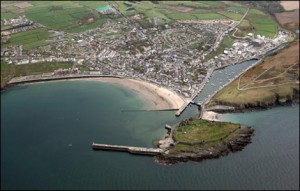 The Isle of Man, a self-governing British Crown Dependency, is looking mighty interested in digital currencies. On Wednesday, the island’s Financial Supervision Commission(FSC) affirmed that “a Bitcoin exchange that holds client funds with a licensed overseas payment service provider is not required to obtain a license in the country for its activities,” according to Coindesk. However, this act of lenience might not last forever.

The FSC says that their ruling might change in order to regulate the digital currencies. Thus, it’s important for people who wish to use digital currencies to keep track of any new legislation and be prepared for possible changes.

Barrister and solicitor, R Paul Davis, is the Group General Counsel for the Counting House Services companies. He has written a guest article in Coindesk about the Isle of Man becoming a harbor for Bitcoin.

Davis writes that working within the rules of the FSC might be daunting to some, however many exchange operators who are looking forward to working in the Isle of Man would like regulation.

“This would open the doors of at least two specialized island banks who are ready to offer facilities to regulated entities, but not to unlicensed businesses.”

Before any legislation is done, however, Davis believes that the FSC will need some time to better understand the new field of virtual currencies.

Why Isle of Man is good for Bitcoin?

Due to the fact that business pay no corporate taxes and banks only 10% on the Isle of Man, having Bitcoin exchanges and business will be a good move. In addition to the low tax rates, the island, according to Davis, has a

This will definitely be important for Bitcoin, seeing as how ex-Bitcoin exchange Mt.Gox met its demise due to a supposed DDoS attack.

Furthermore, the island is known as a safe haven for financial institutions and businesses. After the FSC decision, Davis writes that two Bitcoin exchanges have started their business on the island. In fact, up to 15 more exchanges are considering making the island a base for their operations, according to Eric Benz of the UK Digital Currency Association.

At the end of the day, the Isle of Man seems like a good place to commence Bitcoin operations as the island appears to be a fantastic financial hub.