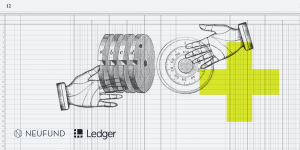 Neufund, the end-to-end solution for securities tokenization and issuance, announced in a press release CoinReport received from Blonde 2.0, Neufund’s PR firm, a partnership with Ledger, a leader in security and infrastructure solutions for digital currencies and blockchain applications.

Both firms will collaborate to create a safe user-experience for crypto investors by building a framework for security tokens.

Ledger recently launched a desktop app – Ledger Live – for user-friendly crypto asset management, and it plans to soon add an ERC20 integration to it. The application will allow for users to manage security tokens issued via Neufund’s set of protocols.

Neufund CEO Zoe Adamovicz said in the news release we received, “Currently, Ledger’s hardware wallets are the safest way to set up and manage investments conducted through Neufund’s set of protocols. With operations in the 7-9 digit (€) range, security becomes a the top priority. Enabling investors to manage their ERC-20 based equity tokens directly from a desktop app will disrupt the way we interact with our crypto assets.”

Neufund’s platform already has Ledger’s solutions incorporated. Investors and firms can set up and manage their accounts via Ledger’s hardware wallet. The partnership between the two firms broadens an earlier project, which built a special edition of the Ledger Nano S to high-profile investors taking part in the Initial Community Building Mechanism of Neufund last year in November. The devices were then notarized in German, which offered an extra layer of security to its hardware wallet.

Ledger CEO Eric Larchevêque commented, “We are excited about today’s announcement. It marks a new, important chapter in bringing security tokens to the Ledger platforms.”

He added, “We are thrilled to be joined at this frontier by Neufund, a leader in securities tokenization and issuance.”

At present, Neufund is hosting its first public offering of equity for its parent company, Fifth Force GmbH. The public sale started on December 9 at 11am UTC and ends on the 16th. The name of the token is FORCE, and the currencies accepted are EUR and ETH, where one share will be equivalent to 10,000 equity tokens.