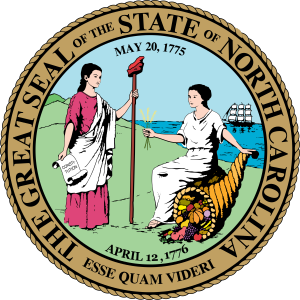 According to a committee document, the current MTA, enacted in 2001, regulates non-bank entities that operate in the business of transmitting funds on behalf of others.

The main changes proposed by SB680 include:

The SB680 document includes the following definition of virtual currency: “A digital representation of value that can be digitally traded and functions as a medium of exchange, a unit of account, or a store of value but only to the extent defined as stored value under G.S. 53-208.42(19), but does not have legal tender status as recognized by the United States Government.”

Stored value is defined in the bill as follows:

“Monetary value representing a claim against the issuer that is stored on an electric or digital medium and is evidenced by an electronic or digital record, and that is intended and accepted for use as a means of redemption for money and monetary value or payment for goods or services. The term does not include stored value that is redeemable by the issuer exclusively in goods or services; stored value that is redeemable exclusively in goods or services limited to transactions involving a defined merchant or location or set of locations, such as a specific retailer or retail chain, college campus, or subway system; or program points, miles, or other units issued in connection with a customer affinity or rewards program, even if there is a secondary market for the stored value.”

The Washington, D.C.-based Chamber of Digital Commerce, which presented on blockchain technology at the committee meeting last week, said in a press release the revised MTA would not only clarify the licensure requirement as to a range of virtual currency-oriented business models, but would also make key distinctions between businesses using virtual currencies and those using their underlying technology.

“The state-by-state money transmitters licensing regime is a costly, onerous and labor-intensive path for any company to take,” said Chamber of Digital Commerce founder and president Perianne Boring in the press release. “The passage of this Act into law is good for business, jobs and innovation in North Carolina. We urge Senate leadership to take the next steps to bring it to the floor for a vote.”

Carla Reyes, an associate at the law firm Perkins Coie LLP, which also presented at the committee meeting, said in the chamber press release the bill “represents a thoughtful approach to virtual currency regulation that reflects prior work by the Conference of State Bank Supervisors and the on-going efforts of the Uniform Law Commission.”

Reyes added, “The importance of clarity provided through legislative action to members of the industry cannot be overstated, and the Act offers both that clarity and other important update to North Carolina money transmission law.”

Coin Center, a non-profit research and advocacy organization based in D.C., differs on the matter of clarity.

In a blog post, executive director Jerry Brito writes that SB680 adds virtual currency to the MTA by requiring a license from anyone who “engage[s] in the business of…maintaining control of virtual currency on behalf of others,” but it does not define “control.”

While the clause may be helpful for those who know for certain whether they’ll need a license or not (yes for custodial wallets and exchanges, no for those that never touch virtual currency, such as permissioned blockchain software providers), Brito wonders, what about all the other applications of cryptocurrencies that are pushing the envelope and spurring innovation?

For example, what if you are a node on a Lightning Network? Other people’s virtual currency are temporarily locked in a multi-signature address to which you have one of two keys. You can deny relaying their transaction for the period of the lock, but you cannot transact yourself, or permanently encumber the currency. Brito wonders, are you “maintaining control”?

He points to FAQs published by North Carolina’s banking commissioner that interpret existing law, praising the exclusion of multisig services providers from the licensing requirement. However, “while the FAQs are spot on about multisig, it’s silent on the Lightning Network,” Brito writes. “And who knows what other innovations may come our way that would benefit form a clear definition that would help entrepreneurs make informed choices.”

Brito recommends the state adopt a precise definition of “control” as the one Coin Center helped develop with the Uniform Law Commission for the draft ULC Virtual Currency Business Act: “possession of sufficient virtual currency credentials or authority on a virtual currency network to execute unilaterally or prevent indefinitely virtual currency transactions.”

The other option for North Carolina is to wait for the ULC to issue its final model act and consider adopting it instead. The draft act “has included clear exemptions for mining, third-party storage services, and an exemption for companies who hold a de minimis amount [too minor to merit consideration] of consumer funds that serve as a start-up on-ramp.”

There are other aspects where SB680 does not compare well to other state legislation or even New York’s BitLicense, says Brito. While the bill “has exemptions for agents of payees and avoids dual licensing, which is excellent, it has no explicit exceptions for software development and dissemination or for non-financial uses of virtual currency, and no transitional license or a start-up on-ramp as even the BitLicense has.”

A bill must consider a wide range of applications for it to be truly friendly to cryptocurrency, concludes Brito, adding that Coin Center advocates “for outcomes that allow for the continued innovation for all aspects of the ecosystem.”