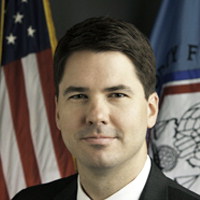 Mark P. Wetjen, formerly one of five commissioners of the U.S. Commodity Futures Trading Commission (“CFTC”), the U.S. financial regulatory agency that oversees activities and trading in most types of exchange-traded and over-the-counter derivatives. Mr. Wetjen was nominated by President Barack Obama to serve a five-year term in March 2011 and was unanimously confirmed by the U.S. Senate in October 2011.

In addition, Mark Wetjen, DTCC’s head of global public policy, has been appointed to the center’s advisory board, which includes prominent academics, technologists and investors such as Marc Andreessen, general partner at Andreessen Horowitz, and Fred Wilson, managing partner at Union Square Ventures.

“Distributed ledger technology offers the financial industry a unique opportunity to advance targeted improvements to the infrastructures that underpin the global capital markets,” said Wetjen, a former commissioner of the Commodity Futures Trading Commission, in a press release sent to CoinReport. “Distributed ledgers provide an opportunity to innovate. I am pleased to join Coin Center’s board of advisors and look forward to working toward a regulatory climate that is welcoming to these exciting technologies.”

Earlier this year, DTCC said it would start testing an application of the blockchain to help mitigate issues related to short-term markets known as repurchase agreements, or “repos.”

Wetjen’s appointment at Coin Center follows his recent appointment to the Chamber of Digital Commerce’s board of advisors. Additionally, DTCC has joined the chamber’s executive committee.