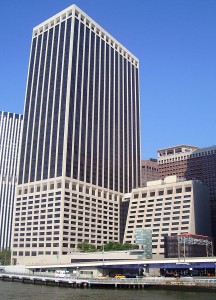 55 Water Street in the Financial District of Manhattan, New York City, with its 15-story north wing, as seen from the East River. The building is the headquarters for Standard and Poor’s, EmblemHealth, FXCM, and Depository Trust & Clearing Corporation (DTCC).

Repos play an important role in the financial system by keeping cash and securities circulating among hedge funds, investment banks and other financial bodies.

An industry-owned utility that helps settle trades in the $2.6-trillion repo market and elsewhere, DTCC wants to apply blockchain technology to the market in order for lenders and borrowers to keep track of securities and cash flowing between companies in real time.

The Wall Street Journal reported that to test blockchain’s ability to bolster repo trading, DTCC partnered with Digital Asset Holdings LLC, in which it invested earlier this year.

Murray Pozmanter, DTCC’s managing director and head of clearing services, told the newspaper that the new arrangement with Digital Asset should help because the blockchain would allow for all firms to agree on trade terms more quickly.

Currently, traders have to process two part of each trade separately: one for the borrowers to deliver securities in exchange for cash, and the other in which DTCC unwinds the trade, said Pozmanter. While the trade is in motion but yet to be completed, the banks involved can assume the risk.

The Wall Street Journal said using blockchain in this market is still in its infancy and may not be rolled out fully if regulators are wary or if banks don’t completely support the concept. Repo traders ultimately may be slow to accept changes that they worry could be cumbersome or hamper their competitive position, the newspaper said.

However, some bankers have been keen to explore blockchain technology as a means of saving money and making it easier to meet capital rules that apply to the trades. The Wall Street Journal pointed to figures from Autonomous Research, which estimates that $120 billion worth of capital annually is tied up in transactions between Wall Street firms, and that blockchain could cut that by $6 billion. That money could be returned to shareholders or allocated to more profitable activities.

DTCC officials said they may roll out blockchain technology to other markets beyond repos. The Wall Street Journal reported that startups such as itBit, Digital Asset, and Symbiont are competing with one another and with banks’ own internal efforts to develop new blockchain-based systems. Working with a utility like DTCC could be a shortcut to becoming a default technology, said Blythe Masters, Digital Asset’s chief executive, to the Wall Street Journal.

“Working with DTCC is much easier that going to talk to all the participants in the repo market separately and persuading them to adopt a new technology,” said Masters.