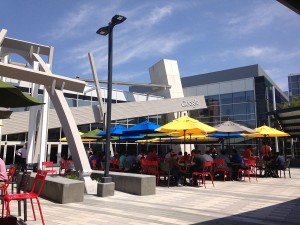 A view of the Google logo from the patio of area of Googleplex between buildings 40 and 43.

Paul Taylor, whose speech recognition software is featured in more than a billion Android smartphones, is an academic at Cambridge University, specializing in artificial intelligence, speech synthesis and machine learning. He started developing the blockchain-powered system, called Vault OS, two years ago.

“Most of the banks are using systems that were written in the 80s and 90s, and they just are not ready for the security-conscious internet app age at all,” said Taylor to Reuters. “What the blockchain does is provide a very secure way of storing transactions.”

The news agency said the OS eliminates the need for expensive in-house data centers, as it employs cloud-based systems, which banks can use on a “pay-as-you-go” basis, without a single point of failure.

Taylor told Reuters that major high-street banks were pumping roughly £1 billion ($1.3 billion USD) annually into computer technology, much of which, he stated, was being used to prop up the existing system rather than investing in innovative technology.

Taylor said his startup has been collaborating with about 10 banks, at least one of which is slated to start a trial using the OS in August. He expects the system to be operational within about a year.