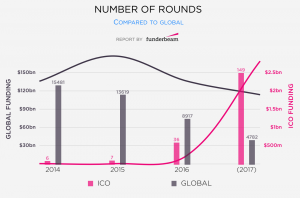 According to the company’s ICO Funding Report:

The full ICO Funding Report can be downloaded from here.