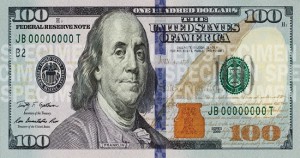 Speaking with CNBC, a group of currency experts stated that in twenty years the United States dollar will most likely still be the world’s reserve currency. They further stated that the likelihood of bitcoin not being around is probable. Regardless of the turnout, the state of money is likely to change overtime and people will witness the effects of that in the future.

The quantity of the dollars around the world has increased tremendously and many people are convinced about the currency losing its value and status as a global reserve currency. ConvergEx chief market strategist, Nicholas Colas, said if a person truly wants to get the inside scoop into the status of the dollar, he should begin looking at the $100 bill.

According to Colas, the demand for the hundred dollar bills is increasing. He further added that the dollar will very likely remain a global reserve currency so long as it is the way global markets price “gold and oil and guns.” Colas remarked that at the end of the day, money is secured in the trust of people and the U.S has a great record in being good for its debts globally.

Colas also pointed out that the United States is at the top, when it comes to preventing counterfeiting. The U.S spent $120 million to redesign the new $100 bill last year to make it extremely difficult to counterfeit.

The group of currency experts shared that the world already has a digital currency; the United States dollar. Expressing the similarities between the dollar and bitcoin and how the dollar is actually better than bitcoin, Colas goes on to say,

“The $100 bill is the world’s bitcoin. It’s anonymous. It’s easy to use. It’s actually easier than bitcoin, because you don’t need a computer or even power.”

Bitcoin took a large hit after the collapse of one of the largest bitcoin exchanges, Mt. Gox, in February. The sentiment expressed by economists is that in 25 years, bitcoin won’t really be at the top of the ladder but the idea of digital currency may remain.

“The really interesting story in money is its digitization, and the huge amount of friction that exists in the system, and the way that technology destroys all those costs.”

Christopher Vecchio, a currency analyst for the DailyFX trading news site, stated that there are many who already believe money to be digital.

“The bank isn’t holding a lot of money in there. The money in your account is data. It’s a set of zeros and ones,” he said.

He further commented that even though bitcoin’s characteristic of having reduced transaction costs is notable; Vecchio believes this shift is part of a larger scheme of things.

“The future of money will really be on finding ways to transact in a lower-cost way, and that’s a societal trend, not just bitcoin,” he said.

For more bitcoin news, be sure to follow CoinReport.