With this new, requested functionality, the exchange users are now able to margin trade ETH/EURO as well as BTC/EURO, with leverage of five and 10 times, with further trading pairs announced in the future. Alternatively, users can lend money to other margin traders and earn interest. 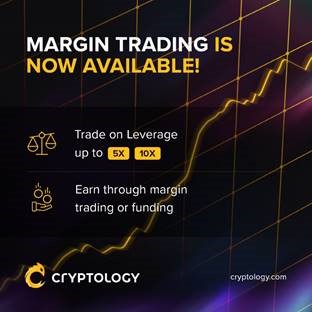 Cryptology chief marketing officer Herbert Sim said in a press release CoinReport received from Aspectus, the exchange’s PR company, “The Cryptology community has been clear in its desire for margin trading opportunities, which are not commonly offered in the crypto arena. We’re responding to that desire by offering our own functionality for experienced and institutional traders.”

He added, “This is the latest step in our ongoing efforts to help Cryptology users get the most value out of their trades by bringing in a suite of trading options. The ability to buy and sell on margin means that users can capitalise on their positions even in bear market conditions.”

The unveiling of the margin trading feature follows a progressively mature digital currency market, says the news release, adding that in the past year the space has witnessed more requests for additional professional trading functionalities like P2P funding and margin trading.

This demand, says the release, can increase even further next year because, according to experts, considerable institutional money influx is expected in the first half of the approaching year.

With these opportunities becoming more accessible and users borrowing more money to trade, the market is expected to get more liquid, reducing volatility and bringing digital currency markets more in accordance with traditional trading choices like equities. Consecutively, this could bring about increased adoption of digital currency trading in the years to come.

“In the cryptocurrency space, the best is yet to come. With this move, we are helping to professionalise cryptocurrency trading – bringing stability to the market and making it simpler for anybody to trade in future. That’s true democratisation of finance,” concluded Sim.