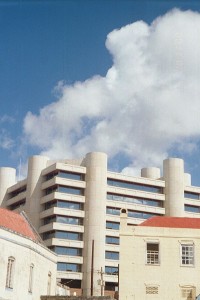 Close-up of the Central Bank of Barbados headquarters, located in the city of Bridgetown. (c.a. November 2000)

This year we’ve witnessed a growing interest in bitcoin and blockchain technology from governments and financial institutions. In a working paper titled “Should Cryptocurrencies be Included in the Portfolio of International Reserves Held by the Central Bank of Barbados?,” economists Winston Moore and Jeremy Stephen suggest the nation should hold a small amount of bitcoin in its foreign currency reserves.

The working paper explains that central banks are required to hold reserve assets, such as gold or foreign exchange, to provide credibility for their nations’ fiat currencies. Since cryptocurrencies are increasingly being used more for international transactions, the economists examine the impact of including cryptocurrencies in a reserve portfolio.

Moore and Stephen utilized two methodologies to assess the impact of bitcoin on the portfolio of the Central Bank of Barbados. The first assumed a fixed proportion of the bank’s foreign reserves be invested in bitcoin (ratios of 0.01%, 0.1%, 1% and 5% for comparison purposes), and examined the results if the nation invested from the years 2009-2015. The second method utilized the Monte Carlo method, which examined the effects of random shocks (e.g. payment shocks, exchange rate shocks) on the bank’s international portfolio over future time spans of 1,2,5 and 10 years.

The first method showed that bitcoin’s impact on reserve balance volatility wouldn’t have differed much from the volatility experienced due to other currencies. The method also showed that investment would have generated a significant return for the central bank. The Monte Carlo method showed that after 2018, potential returns on bitcoin could rise substantially. Coupled with this rise, however, is the rise of reserve volatility.

The paper concludes that if the central bank decides to incorporate bitcoin into its foreign reserve portfolio, it should do so with a relatively small share.

“Given that the proportion of transactions done by Barbadians in digital currency is not likely to exceed 10 percent of all transactions in the short run, it is therefore recommend that if Bitcoin is incorporated into the portfolio of foreign balances of the Central Bank of Barbados, that its share should be relatively small.”

The suggestion of a central bank including bitcoin is significant in many ways. The paper specifically discusses bitcoin, and not another cryptocurrency or the blockchain. Most mainstream proponents within finance and fintech are focused on the blockchain, and have doubts on the currency itself.

Of course, strides are being made on national levels to embrace bitcoin. The Netherlands, for example, hold bitcoin-specific festivals and accepts the cryptocurrency in everyday places like supermarkets. Though not specifically with bitcoin, Coinjournal explains this paper came after last month’s announcement that the Central Bank of Barbados was partnering with bitcoin startup Bitt to create an electronic dollar. Furthermore, a Cryptocoins News article earlier this year discussed a study by Magister Advisors, which said that bitcoin will be the world’s sixth largest global reserve currency by 2030.

Moore and Stephen’s working paper is perhaps more than a suggestion, and maybe a foretelling of what’s to come.