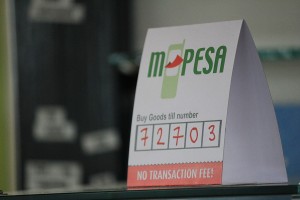 An M-Pesa payment register at a Kenyan coffee shop

For many years, M-Pesa, which is short for “mobile money” in Swahili, has dominated the mobile phone financial service market in the developing world. On December 14, a preliminary ruling from a high court in Kenya will rule on a conflict between telecom Safaricom, which operates M-Pesa, bitcoin company BitPesa, and Lipisha, the payment company that gateways both BitPesa and M-Pesa. International Business Times reported the story earlier today, stating this battle is a manifestation of the payments revolution of our time.

The article explains the conflict started when Safaricom stopped Lipisha from processing M-Pesa transactions. Safaricom reinstated Lipisha’s access on the condition that Lipisha end its relationship with BitPesa. Safaricom’s justification is that BitPesa does not meet anti-money laundering (AML) requirements, and claims the company needs a license to connect with its customers. BitPesa responded by converting customers’ bitcoins into Kenyan shillings and then sent them to recipients’ M-Pesa.

BitPesa and Lipisha are suing Safaricom, claiming the company had no right to put Lipisha in that position and to restrict access to M-Pesa. BitPesa told International Business Times that the company has put in place AML policies required by the Kenyan government. Involved in the decision are the close-working Central Bank of Kenya (CBK), the Competition Authority of Kenya and the Communications Authority of Kenya. The article stressed that the December 14 decision is not a final ruling, but will instead set the precedence for the rest of the proceedings.

The Potential of Bitcoin

The hostility of Safaricom comes from the fact that it’s been the dominating player in the mobile financial services market since 2010. It’s also been under pressure by Kenyan governing authorities due to this dominance. Furthermore, Jean-Stéphane Gourévitch, CEO Mobile Convergence Ecosystems, told International Business Times that Kenya has been supportive of BitPesa.

While BitPesa is a payment and trading platform specifically for Africa, bitcoin is a cryptocurrency that doesn’t currently hold to political borders or regulations. Bitcoin gives people in Kenya the ability to participate in transactions with bitcoin holders around the world. Regarding security, BitPesa’s site mentions that no trade has ever been intercepted.

This system is very different from M-Pesa. Greg Reeve, COO for Mobile Financial Services at Millicom, told International Business Times that M-Pesa follows a fully prepaid model, as all money is backed by local currency and banks. Reeve also explained that companies have to work within Kenya’s regulatory environment, one that isn’t readily compatible with bitcoin.

So the question becomes – is this the time to grow bitcoin in Kenya? Of course; a ruling in favor of BitPesa would help the nation incorporate a new model for electronic payments. If anything else, this type of ruling would reinforce Kenya’s favorable position toward competition.