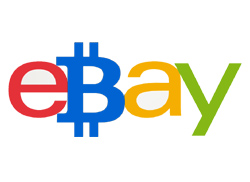 Miller insisted that bitcoin would cause PayPal to become obsolete in the digital payment industry in the near future. He said that digital currencies will rule the way digital commerce is conducted. Miller asked Donahoe if he had any plans to combat the situation. Donahoe clarified that:

“PayPal is building a digital wallet that can take multiple types of currency.”

It seems eBay has filed a patent application with the United States Patent & Trademark Office containing mentions of bitcoin. Patent 20130173416, titled “System And Method For Managing Transactions In A Digital Age” was published July 4th, 2013, but was actually filed back on December 29th, 2011.

The patent refers to an eBay bitcoin exchanger type of system, which can be used to accept any form of currency. This includes digital currencies such as bitcoin. An extract from the patent reads:

According to the patent, the eBay bitcoin exchanger payment system will allow users to earn some sort of reward or mileage points. These rewards will be redeemable for goods and services on other networks.

PayPal president David Marcus has acknowledged his views on bitcoin saying, “I really like bitcoin.” He even admitted to owning bitcoins.

Marcus believes that PayPal may involve itself with bitcoin in the future, when the time is right for his company to do so. Similarly to Donahoe, Marcus is keeping a close eye and an open mind on the evolution of digital method payments.

Donahoe says his company is currently working on implementing bitcoin for PayPal users. This would allow Paypal to follow the digital currency trend, rather than be left as an after thought in how mobile and digital payments are conducted. For it to work, PayPal will need to give the right amount of time and attention to ensure all systems are functional.

If PayPal were to become a trusted bitcoin wallet, it could be argued that bitcoin would receive the online security it needs to flourish. New bitcoin firms have been hacked and robbed of thousands of bitcoins. But with a reliable and long standing firm like PayPal, bitcoin withdrawal and exchange services can potentially remain safe.

For further security precautions, PayPal may be able to keep bitcoins and other forms of digital currency in cold storage to prevent intruders from hacking bitcoin funds.

Services such as Japanese bitcoin exchange Mt Gox and bitcoin bank Flexcoin have failed to preserve their user’s bitcoins. With Paypal’s experience and knowledge in payment processing, bitcoin may have a better shot advancing further.

Blockchain Releases its own Merchant App