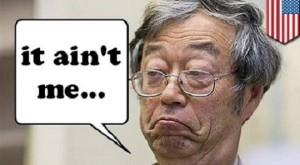 Dorian Satoshi Nakamoto, the man who Newsweek claims to be the creator of Bitcoin, denies any involvement in the digital currency. Reuters blogger Felix Salmon posted Dorian Nakamoto’s message on his twitter page after receiving it from Ethan Kirschner, Nakamoto’s lawyer.

In the message, Nakamoto says,

“I did not create, invent, or otherwise work on Bitcoin. I unconditionally deny the Newsweek report.”

The Newsweek report written by Leah Goodman labeled Dorian Nakamoto as Bitcoin’s elusive creator. In the article, Goodman included Nakomoto’s sensitive and identifiable information which led swarms of reporters straight to the elderly man’s house. A wild car chase commenced from here which ended in Dorian Nakamoto giving an interview to AP. According to the AP report, Nakamoto denied any involvement in Bitcoin, and actually referred to the digital currency as “Bitcom.” Nakamoto says in his current statement, “In an ensuing discussion with a reporter from the Associated Press, I called the technology ‘bitcom.’ I was still unfamiliar with the term.”

If this wasn’t clear, Nakamoto continues and says that

“[he has] no knowledge of nor [has he] ever worked on cryptography, peer to peer systems, or alternative currencies.”

In addition to denying his involvement in Bitcoin, Dorian Nakamoto says that he never consented to Leah Goodman’s interview. In fact, he had called the police. In addition, Nakamoto says that the first time he ever heard of Bitcoin was in the middle of February when his son told him that a reporter wanted to speak to him.

Nakamoto, who has experience in electrical engineering and computer programming, has been struggling with finding a stable job in those fields for ten years. He says,

“My prospects for gainful employment have been harmed because of Newsweek’s article.”

Things had gotten so bad that Dorian Nakamoto had to shut down his internet. He says in the statement,

“I discontinued my internet service in 2013 due to severe financial distress.”

If Dorian Nakamoto was truly Satoshi Nakamoto, then he could have easily been living the “good” life as Satoshi is said to be worth around $400 million. With this much money, Nakamoto definitely wouldn’t have needed to shut off his internet due to financial constrain.

Nakamoto says that he’s still trying to recover from prostate surgery in 2012 and a stroke in 2013. Adding this to all of the stress he’s received from Newsweek’s article, has highly disrupted his and his family’s life. In fact, Nakamoto says that the false report caused “a great deal of confusion and stress” to his entire family.

Dorian Nakamoto’s brother, Arthur, turned to reddit to speak of his frustrations with Newsweek’s report. Arthur said he was angered by the “misquoting and blatant lies” that journalists had said. He also explained that he and his family were afraid for their safety, angered because of their privacy being invaded and concerned for Dorian who had been trying to recover from health issues.

Concluding his statement, Dorian Nakamoto thanked everyone who has been very supportive of him. He also says that he has gotten legal counsel and wished for privacy as this will be his “last public statement on this matter.”

It’s amazing and sad how one hasty report can damage someone’s life to such an extent that he fears for his own safety. From all of this, Dorian Nakamoto clearly does not appear to be Bitcoin’s founder in anyway. He is just an elderly man who is trying to take care of himself and his 93-year old mother.