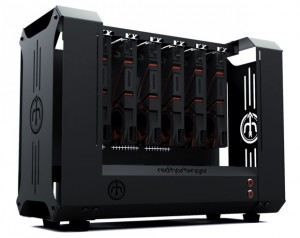 Red Harbinger, a boutique PC company, has created the first computer case for mining Bitcoin. The case is called Dopamine and it is specially designed to mine for cryptocurrencies.

How is Dopamine Different?

Dopamine is different than regular PC cases in a few different ways. One of the major ways is that it has enough room to hold six graphic cards. High speed video boards such as AMD Radeon R290x are running low in supply because of how fast they are able to do the calculations that are required in Bitcoin mining.

Dopamine is an open-air computer case because six graphics cards running at their full potential will exude a lot of heat. In addition, the world’s first Bitcoin mining case “includes three fan mounts on the bottom of the case to assist in circulating airflow.” Dopamine is also able to handle two power supplies “and a range of motherboard forms (from mini-ITX to extended ATX)”.

Red Harbinger is trying to spread awareness and get funding for their Dopamine by advertising it through a crowdfunding website called Indiegogo. It has so far earned $6065 towards its $20,000 goal, and the company has 43 more days left to reach their goal. If you contribute $200 you can get a black or white case by August 2014. Shipping outside the U.S is an additional $50.

If however, you do not wish to build your own Dopamine system, Red Harbinger is offering another option. For $4,999 you will get a fully configured computer case. This will include a Dopamine that has a motherboard, three fans, six GPUs, processor, and a pair of power supplies. You will be able to choose the color of the case, but the specific components are not yet listed.

Assuming that the $20,000 goal is met, Dopamine is expected to be delivered around July and August 2014.