A Conversation with Professor Rakesh Kumar 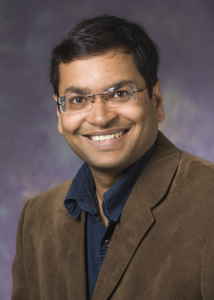 Rakesh Kumar, Associate Professor in the Electrical and Computer Engineering department at the University of Illinois at Urbana-Champaign

Bitcoin mining is the cornerstone to the bitcoin framework and has helped make it today’s most popular cryptocurrency. The competition for verifying transactions is fierce. Any advantage can lead to significant gains in profits for that particular miner.

Finding these advantages has been the focus of a team in the Electrical and Computer Engineering department at the University of Illinois at Urbana-Champaign. Matthew Vilim, Henry Duwe and Professor Rakesh Kumar have been exploring how approximation mining circuits, which trade off reliability with area and delay, affect a miner’s hash rate and, therefore, profits. In a peer-reviewed study, approximation was shown to potentially increase mining profits by up to 30%. The paper will premier at the Design and Automation Conference in San Francisco this June.

CoinReport had the pleasure to review an early draft of the paper and speak with Professor Kumar. In our interview below, Professor Kumar discusses approximation, the team’s study and its implications for bitcoin mining.

CoinReport: Can you tell us a bit about your academic background?

Prof. Kumar: I am an Associate Professor in the Electrical and Computer Engineering department at the University of Illinois at Urbana-Champaign where I direct a research group of around ten students focusing on different aspects of computer architecture, low power and error resilient computer systems, and approximate computing. My research group includes Matthew Vilim and Henry Duwe, the students who led this work on approximate bitcoin mining.

Prof. Kumar: While I have always been intrigued by the idea of cryptocurrencies, two relatively recent developments spurred my recent interest in the topic:

First, cryptocurrencies and blockchain have started being talked about as a way to enable an internet-of-everything future. The idea is that if different devices in our lives (e.g., cars, watches, washing machines) need to communicate and transact with each other as well as the internet while still being sufficiently distrustful of each other, trustless communication and transaction protocols such as blockchain may become key. For an academic researcher like me, this is very interesting because this enhances the generality and potential impact of any work on efficient hardware supporting blockchain and cryptocurrency.

Second, mining economics has phased out CPUs and GPUs – mining is largely being done using ASICs and FPGAs. This allows an easier path for a researcher to make an impact since it is very difficult to convince a CPU or GPU manufacturer to make changes to their design to support one application. The question that we started asking in our group is: what role can hardware play in making blockchain protocol and associated applications, such as cryptocurrencies, more efficient and secure? Our work on approximate bitcoin mining is our first step in that direction.

CoinReport: Can you walk our readers through approximation? Why is this valuable to bitcoin mining?

Prof. Kumar: Many applications have inherent error tolerance. So, even when they are run on hardware that is not guaranteed to produce correct results all the time, their output tends to be acceptable. As a common example, many signal processing applications (e.g., image, video, audio,) tend to be tolerant to hardware errors to a significant degree.

The primary observation of our work is that bitcoin mining is error tolerant. Two characteristics of the mining process make it error tolerant:

First, mining is an embarrassingly parallel application.  Each nonce can be be used to generate bitcoin hashes independently. So, even if one of the hashes is erroneous, it does not affect other hashes. So, the effect of any error is contained.

Second, bitcoin mining is an inherently probabilistic application. An error in a hash computation simply reduces the probability of the hash being valid. So, as long as an approximate bit coiner miner can be built to be a lot faster, smaller, or lower power than today’s mining hardware, the overall profit can be increased even if the probability of a given hash computation to be valid is reduced. This is because smaller and faster miners allow much higher hash rate in the same chip area, while a lower power miner reduces the cost of mining. There is some probability of an approximate miner to broadcast an invalid proof-of-work, but this will be immediately detected by the network and discarded. So, the blockchain is never corrupted.

CoinReport: Have others previously studied the effects of approximation on bitcoin mining?

Prof. Kumar: To the best of our knowledge, there has been no work on approximation for bitcoin mining. Furthermore, to the best of our knowledge, there has been no published work on any optimizations for ASICs for bitcoin mining.
CoinReport: Can you give us an overview of your study? Specifically, how did you test approximation on bitcoin mining?
Prof. Kumar: Our study first analyzes the hardware implementation of the core algorithm, SHA-256, used in today’s miners to generate proof-of-work hashes. The goal was to determine the primary efficiency bottlenecks in mining. We find that the hash rate of the miners is determined by the delay of adders that are at the core of a SHA-256 hardware implementation. We then replaced these adders with different approximate adders that were smaller and much faster. This allowed us to:

This increased mining profits by over 15%.

CoinReport: The results of the paper have shown that approximation can increase profits for bitcoin miners. How do you see the bitcoin community incorporating this research into their mining processes?

Prof. Kumar: Mining is an area where new ideas can make an immediate impact. This is because mining economics dictates the need for new ASIC designs every so often. So, new ideas can be incorporated in a near-future spin. More importantly, economics dictates that every ASIC design be as cost-efficient as possible since even a small improvement in efficiency can lead to a large competitive advantage.

I hope that approximation is incorporated in future ASIC designs to improve profitability. Furthermore, I hope that the mining industry, which is famously secretive, becomes more receptive to research coming out of academia on low power and high throughput computing, since research can help them directly with profitability.

CoinReport: How does it feel to be presenting at the Design and Automation Conference in June?

Prof. Kumar: I am looking forward to presenting this work to a broader community of hardware designers. We have only scratched the surface when it comes to optimizing bitcoin mining hardware. I think that careful application of hardware techniques such as near-threshold voltage computing, asynchronous computing, and adaptive power management has potential to increase mining profits much further. Hopefully, this work will spur such activity in the hardware design community.  More broadly, cryptocurrencies and blockchain have an important role to play in enabling internet-of-everything. My hope is that at least some hardware designers will start investigating the role hardware can play in supporting cryptocurrencies and trustless communication protocols such as blockchains.