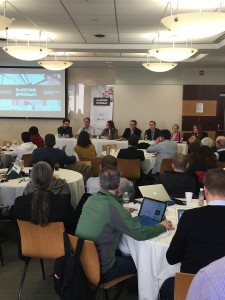 “The NYU Blockchain Workshop was an important event featuring some of the most pioneering blockchain-based applications —the real game changers,” said Primavera de Filippi, co-founder of COALA in a press release sent to CoinReport. “Entrepreneurs and engineers from across the globe came to New York, and each of them brought something uniquely valuable to the audience.”

The events held over the two days went into great detail to explain how blockchain technology works and how it’s challenging existing institutions within and outside finance and fintech. The earliest panels, for example, were titled “What Makes the Blockchain Different from Legacy Technologies?” and “Why is Blockchain Policy Different From Legacy Policies?” Other panels covered everything from mapping protocol layers to understanding how blockchain technology can increase transparency and accountability within organizations.

Keynote addresses were given by Henning Diedrich, senior software engineer at IBM, and Frank Pasquale, law professor at the University of Maryland.

Coala is a collaborative community of academics, entrepreneurs, lawyers and technologists that has been helping to drive infrastructure-building, policy and research within the blockchain technology industry. The organization has hosted blockchain workshops at universities including Harvard, MIT and Stanford, and in cities including London, Hong Kong and Sydney.

Angus Champion de Crespigny, financial services technology consultant at Ernst & Young, has been attending COALA workshops since early last year. “The reason I keep attending is twofold,” he said in the same press release. “Firstly, they provide a valuable service to the industry in helping to shape relevant, forward looking regulatory and operating frameworks which encourage innovation. And secondly, the conference consistently provides rich, exciting content that is low on fluff by bringing in the right thought leaders. And we have a lot of fun contributing.”

“With COALA, we try to create new opportunities for people from different backgrounds to network, to help them gain insights from people they might not work with everyday, and who could become potential colleagues in the future,” concluded de Filippi.