Bitcoin not a convenient means of payment for US shoppers, survey finds 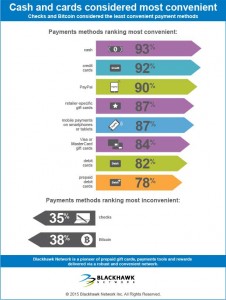 When it comes to paying for goods and services, Bitcoin is among the least convenient options for US shoppers, observes new research released Tuesday by Blackhawk Network, a prepaid and payments company.

The study – “How America Pays in 2015: Traditional, Digital and Mobile Convergence in Payments” – surveyed more than 1,000 American adults to explore how they pay today and how they feel about traditional and emerging payment methods.

Asked to choose the most convenient methods of payment, respondents listed as the top three options cash (93 percent), credit cards (92 percent), and PayPal (90 percent), while Bitcoin (38 percent) and checks (35 percent) were considered the most inconvenient.

Despite cash being considered the most convenient payment method, its use is in decline, according to the survey. Along with checks, cash dropped the most in use in the past year. 18 percent of respondents said they are using alternative methods of payment, such as Bitcoin, mobile wallets, Apple Pay, Samsung Pay, and wearables. Of those respondents, 68 percent said they are using these alternative payment methods more than they did the year before.

Although its use is in decline, cash (93 percent) ranked as the mostly used payment method in the past year, followed by checks (68 percent), debit cards (68 percent), and credit cards (67 percent). PayPal was not far behind, with 62 percent of respondents selecting this method. 14 percent said they made mobile payments on smartphones or tablets in the past year.

“Consumers still have a strong preference for traditional payment methods like debit cards and prepaid cards. Those payments tools are not going away anytime soon, even as interest in and usage of new payment methods grows,” said Teri Llach, chief marketing officer at Blackhawk Network, in a press release. “Our findings prove that payments is not either/or when it comes to legacy payments versus emerging products; it’s really about convenience and providing a mix of options.”