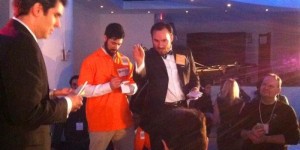 Action at Bitcoin Center in NYC

If you thought that the wild winter storm would have been enough to prevent bitcoin devotees from meeting up and exchanging the coin on site, think again.  On Monday, February 3rd, enthusiasts gathered for some live action of trading the digital currency despite the odds of the weather against them.

Newly created Bitcoin Center NYC on Broad Street was the location of the meet up. First of its kind to be created in New York City, the center was officially opened to the public at the start of the New Year. Nick Spanos co- founded the Bitcoin Center NYC providing a place for all sorts of people to meet, from bitcoin supporters to the average curious Joe. Ironically enough, the place happens to be not very far from the New York Stock Exchange.

With a lot of excited voices ringing in the crowd, some stood out more than others. There were men bellowing at people to buy and sell the digital currency in the similar fashion of the long practiced tradition of engaging in the art of auctioning.

One of the people present, Richie Hecker, came ready and prepared to buy himself some bitcoins.

“I’m going to buy $100 of bitcoin tonight. The question is at what price,” said Richie.

Unfortunately, Hecker, co-founder of the company Traction + Scale LLC, did not end up buying the coin on the trading floor. But, hey, he was able to finally buy 0.1236 bitcoin for $100 from his friend.

Sabrina Slattery, another participant, who was present to check out the bitcoin trade-a-thon in action. Working as a photographer, fashion designer and filmmaker, she came to view the live scene to learn more about the digital currency. Coming in as a newbie about bitcoin, she left the place with having made a bitcoin wallet. Furthermore, the prospect of her accepting bitcoin for the website she hopes to create is a possibility.

Frenzied exchanges that took place are part of Satoshi Square which is the informal gathering of people that allows them to buy or sell bitcoin for cash. The value of one bitcoin has seen an increase in recent year from about $10 to more than $1,000. With that said, these informal gatherings are spreading nationwide which reflects the awareness and interest that bitcoin is creating amongst the masses.

Check out more on what Bitcoin is all about here.