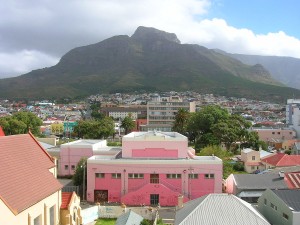 The southern side of the suburb of Woodstock, Cape Town. The Bitcoin Academy’s office is located in Woodstock at the Bandwidth Barn, Block B, 3rd Floor, Woodstock Exchange, 66-68 Albert Road.

The Bitcoin Academy is a new initiative based in South Africa whose focus is to train financial institutions, corporations, developers, entrepreneurs, schools, governments and individuals on Bitcoin and blockchain technology in the country.

Described by Memeburn as the first venture of its kind in Africa, the Bitcoin Academy has collaborated with BitHub and the Cape Innovation and Technology Initiative to offer training at the Bandwidth Barn in Woodstock, Cape Town.

The Bitcoin Academy was founded by Sonya Kuhnel, who launched the South African company Bitcoin Payments and is also the co-founder of Bitcoin Events, which held its first-ever Bitcoin Africa Conference in Cape Town this past April.

“When I first started in the bitcoin space, I encountered significant resistance towards digital currencies from individuals and businesses in South Africa,” said Kuhnel in an interview with Memeburn.

She added, “The level of understanding of bitcoin and its underlying technology, the blockchain, proved to be a real challenge and I realised I would have to first educate the marketplace before there would be any significant uptake of the digital currency and the cutting-edge technology behind it.”

According to its website, the Bitcoin Academy offers three basic courses: Bitcoin 101, Blockchain 101 and Blockchain-based Application. The company will customize courses according to interested parties’ requirements, and discounted rates will be offered to groups of more than 50 people. Each attendee will get a Bitcoin Academy Certificate of Attendance.

The academy offers training solutions for individuals and groups at its offices in Cape Town, onsite training at a person or group’s preferred location and online training where one can learn at their own pace.

Training takes place over a full day and is tailored to meet the needs of various target audiences, with sessions directed at professionals in finance, law, accounting, operations and more.

Training dates are available as of September. Kuhnel told Memeburn that some of the top financial institutions in South Africa have expressed interest in the academy’s courses.

Ian Merrington, CEO of Cape Innovation and Technology Initiative, told Memeburn that “our support for the Bitcoin Academy fits in very well with our Fintech incubation strategy. Our role is to empower the tech and innovation ecosystem, so hosting the Bitcoin Academy provides support for the formal financial industries as well as entrepreneurs and innovators working with crypto currency.”