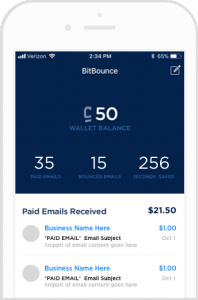 BitBounce, a free email service that works with all major email providers and makes unfamiliar people sending emails to its users pay the users in its own cryptocurrency, credo, for their attentions by putting a paywall around the inbox, has announced the launch of its patent-pending advertising platform, BitBounce Ads.

The new platform will allow for BitBounce users to get paid in credo also by professional marketers/marketing divisions of organizations for receiving their email advertisements, said an email BitBounce sent to CoinReport, adding, every active user will get 70% of the advertising amount they themselves will put on their paywalls (usually $0.05) for seeing an email advertisement.

The payments are deposited to users’ wallets that are immediately accessible on CredoEx, BitBounce’s own digital currency exchange that, according to a press release on BitBounce’s blog, presently supports nine other currencies. The users can convert their earnings into other currencies on the exchange.

BitBounce currently boasts about half a million active users.

“With BitBounce Ads, we have delivered on the promise of Email That Pays. The key components of the system implementing our email market are in place. Now, we’ll keep improving those components, grow our adoption from half a million into the billions of email users, and work with more advertisers so that, finally, people around the world will become the ultimate beneficiaries of the digital economy.”

On the advertising platform, advertisers can run campaigns both recurrently, daily and on a one-off basis. Payment options for advertisers include credo and debit/credit card. If, however, advertisers opt for credit/debit card, their USD payments will be automatically converted to credo through CredoEx.

Presently, BitBounce Ads supports a limited number of targeting options, like sending advertising emails to only the users that have a paywall price below a certain amount. Options like geo-targeting will be made available in the coming months. Moreover, algorithmic changes that will promote more optimal serving of advertisements will also be made in the next some months.

Image courtesy of the company