Auroracoin Value Falls By Half After The Airdrop in Iceland 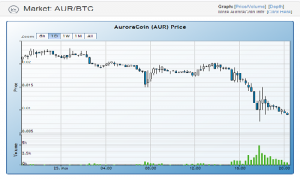 Auroracoin Value Falls after the Airdrop in Iceland

After Auroracoin began its distribution of AUR at midnight on March 25th via the Airdrop, the digital currency has seen nearly 50% fall in value. Auroracoin is Iceland’s first attempt at a national virtual currency.

At the first day of the Airdrop, Auroracoin price fell almost 50%, however, it avoided the quick dive that some people were afraid of. During the press time, according to the Auroracoin website, 281,000 coins had been claimed. This is 2.68% of the 10.5 million Auroracoins.

Nearly 16 hours after the Airdrop, according to Coinmarketcap, the price of the coins was pretty much stable. In fact it is the fourth-largest digital currency by its market cap. By the end of the day, however, Auroracoin’s market cap decreased nearly 50%. Auroracoin is currently worth around $6.56. This is significantly less than the day’s open at $11.93.

Why Did Auroracoin Value Decrease?

According to data charts from Cryptocoincharts suggest that many of the investors sought to exchange Auroracoins for cash.

In addition to this, there were some distribution issues. By midnight, 443 users were waiting for the Auroracoin website to claim coins or to observe what was going on. The website was experiencing technical difficulties due to heavy traffic.

There were also issues with wallet downloads, but above all, it seems that the most pressing issue was the “request timeout” errors.

The co-founder of the Scotcoin Project, Derek Nisbet, is planning on commencing a similar Airdrop in 2014. He said to Coindesk,

“I believe the launch and subsequent uptake of Auroracoin’s in today’s airdrop has proved that genuine interest exists from the Icelandic people with respect to alternative [digital] currencies.”

Alvaro S., SpainCoin’s developer also chimed in on the fact that he and his team are watching Auroracoin,

“We’ll be watching it in the coming days to see how it goes. Spaincoin will have a chance to fix any issues that arise with Auroracoin, we’re ready to use daily quotas for instance, if there’s excessive dumping.”

Regardless of the fact that Aurocoin value decreased, Alvaro said that the digital currency is “doing pretty good nonetheless, taking into account the amount of coins given away are many times the amount supplied per day by mining operations.”

Many people will be looking in to see what happen as a result of Aurocoin’s Airdrop. It’ll be an indicator for other nations to understand what to expect if they too are wishing to do something similar. With this knowledge, the countries can plan and fix things accordingly. In addition, it will serve as a means to spread more awareness of digital currencies as a whole.