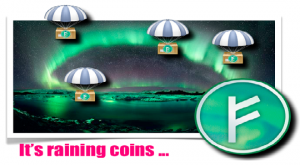 Based on Litecoin, an alternative to Bitcoin, Auroracoin is one of the first serious attempts to use virtual currency in order to save Iceland’s failing economy. Auroracoin was created by a person who uses the pseudonym Baldur Friggjar Odinsson. The alternative digital currency launched in February, and at last midnight, 330,000 citizens in Iceland were given Auroracoins.

The method in which Auroracoins are being given out is called an “air drop” and will continue to take place over the next year. During this time, every citizen is allowed to gain a total of 31.8 Auroracoin. Auroracoin is currently worth $11.41 per piece at the moment.

The price of the coin has been falling slowly and it is estimated that the price could collapse when the citizens of Iceland begin to use the digital currency. This is due to the assumption that the citizens will be rushing to trade and sell their Auroracoins quickly for fiat causing a decrease in the coin’s value. It is also not that clear where Auroracoin can be actually spent.  In addition, the coin has been noted by Iceland’s Parliamentary committee that held an off-record meeting on Auroracoin in the beginning of March.

Auroracoin was created as a challenge and response to the strict controls imposed by Iceland’s government after they were applied due to the financial downfall of 2008. This makes it more than five years since these strict policies were implemented. On Auroracoin website, creator Odinsson says,

Thus, Auroracoin was created as a way to help the citizens of Iceland get back up on their feet. Odinsson told the WSJ,

“The whole point of auroracoin is to provide Icelanders with an alternative to the króna, a currency they are forced by pain of imprisonment to use. Icelanders will be free to sell auroracoins anywhere they like and buy anything they like, be it dollars or other foreign currency on offshore currency exchanges. They won’t need permission from the Central Bank or politicians.”

Whether or not this will be a successful endeavor, only time will tell. In Spain, the Spaincoin has planned to launch a very similar objective as the Aurorcaoin. Distribution of the coins will occur sometime in April. It seems that people in countries with failing economies have really taken a liking to virtual currencies. Bitcoin has begun a whole new innovative sphere in the economic and financial world.