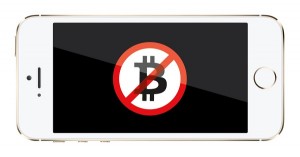 Yes, you have read that correctly, Apple is definitely at it again. Wednesday, 5th of February, witnessed the unexpected low blow dished out by Apple to the bitcoin community and system at large. Apple has underhandedly removed the last remaining bitcoin wallet app from the App Store called Blockchain.

This news comes as surprise (well sort of) because there was no previous mention of the possibility of the app being eliminated. No explanations were offered or a chance given to address the issues concerning the removal of the app.

Towards the end of last month, an article was posted on CoinReport talking about Apple’s removal of most bitcoin wallet apps from their system. This should have been enough of an indication of how Apple feels towards the bitcoin community. In fact, Apple’s actions toward the bitcoin apps seem to be a reflection of its policies against systems that it finds to be a threat to its own profits.

The digital currency, bitcoin, has entered the market and is competing with other payment systems in existence. Some would even say or believe that it can be seen as a potential barrier to their own growth and profits. Earlier last month, it was found that Apple has been looking to create its own payment system. Apparently, Apple happens to be on board with this notion and in order to eliminate competition completely, it has removed the last remaining bitcoin wallet app from its system.

What About the Bitcoin Apple Users?

The Blockchain app had been available on the App Store for two years with more than 120,000 downloads by its users. The number says it all. This was not just a mere average app but rather something that the users flocked to. It seems that Apple did not deem it worthy to look at, or care for its users’ needs and ease of access.

Furthermore, the official communication by Apple says that the bitcoin wallet app was removed due to an “unresolved issue.” Basically, if someone wanted to dispute this statement, it cannot be done because of the vagueness behind the words. It can plainly mean anything from “we felt like it” to “there is a problem with your app.”

But, alas, that will never be known until Apple decides to be mature about the matter and lets us know why the removal took place.