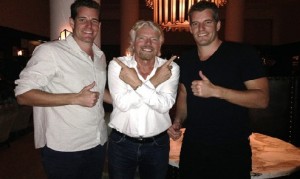 The Winklevoss brothers have decided to use their bitcoins to fly into outer space via Richard Branson’s Virgin Galactic. Before you ask the question why, Tyler Winklevoss answers in a blog post,

“Because Bitcoin and Sir Richard Branson’s Virgin Galactic are two technologies that meaningfully represent our focus at Winklevoss Capital – the reduction of pain-points and friction in an effort to build a better world.”

This concise answer definitely shows that the Winklevoss twins see Bitcoin as a successful and meaningful form of digital currency. This was proven when the twins released a new financial index called the Windex for Bitcoin. The Windex offers the latest price figure of Bitcoin. As such it is clear that the Winklevoss twins support the digital currency and not only that but they also own a good chunk of Bitcoin themselves.

The going rate for a seat on Virgin Galactic is a whopping $250,000. The passenger list also includes high-end celebrities such as Justin Bieber, Ashton Kutcher, and Lady Gaga.

The Winklevoss brothers compared themselves to historic pioneers like the Pilgrims, Marco Polo, Vasco de Gama, Christopher Columbus, and many others. The brothers also wish to be the first twins to blast off into outer space together. American astronauts Scott and Mark Kelly were the first twins to go into outer space, but they didn’t do so together.

In addition, the Winklevoss twins are enthusiastic investors in Bitcoin, and seeing as how the Virgin Galactic accepts Bitcoin, this makes for a lovely combo.

It will definitely be interesting to hear about their adventures in space. Tyler Winklevoss says about Bitcoin on his blog,

“I am thankful that the desire to build beyond what we have inherited and push beyond our own preconceived barriers, are fundamental human traits, and when realized, engender the truest sense of accomplishment.”