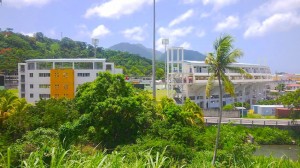 On March 14, 2015, all 70,000 residents of the Commonwealth of Dominica – an island in the Caribbean – will receive Bitcoin during a Bitcoin distribution event titled The Bit Drop. According to the media release sent to CoinReport by The Bit Drop project manager Sarah Blincoe, the forthcoming event is the result of a successful collaboration between island officials and Coinapult, Aspen Assurance, Bitcoin Beauties, College Cryptocurrency Network, and Free Talk Live.

“The Bit Drop is working with full cooperation and support of the island’s government. By partnering with the Dominica’s elected leaders, Aspen Assurance and Coinapult, The Bit Drop will give each islander a small amount of Bitcoin.”

This will be the first time a government will embrace the digital currency’s potential for the population of an entire nation, says the media release.

According to the event site, the goal of The Bit Drop is “to create the world’s largest and highest density Bitcoin community on the planet.” Each islander will receive his/her Bitcoin via SMS.

According to the media release, The Bit Drop will also be a “tropical Bitcoin Party,” with celebrities, musicians, and fire dancers entertaining attenders, who will also enjoy sponsored tropical island spirits and receive free giveaways. There will also be Bitcoin education booths at the party.

“Before the party, we plan to distribute educational materials via government channels on Bitcoin and the ‘Bit Drop’ project. We will create local information centers to educate people about Bitcoin and how to use their new digital wallets and then celebrate in style during the island’s holiday season.”

Image courtesy of The Bit Drop