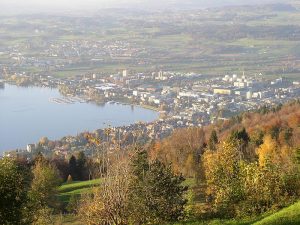 View from Zugerberg to Zug and Steinhausen, Switzerland. Ambrosus is located at Gotthardstrasse 26, 6300, Zug.

Swiss government-backed Ambrosus, a blockchain IoT platform that ensures the quality, safety and origins of products moving through the pharmaceutical and food supply chains, announced in a press release CoinReport received that it has raised more than $30 million in its ongoing token presale.

Ambrosus is founded by Dr. Stefan Meyer and Angel Versetti with Parity Technologies as its technical advisor.

Ambrosus co-founder and CEO Angel Versetti commented on the presale achievement to date, “Our token sale participants, many of whom are early adopters of Ambrosus, see value in a platform that assures the quality, safety and origins of life-essential products. By combining high-tech sensors, blockchain technology and smart contracts, Ambrosus ensures the transparent and efficient recording of supply chain data to a blockchain that can be accessed by anyone.”

He added, “Often inefficient, opaque and corruptible, the world’s system of commodity production and distribution has been slow to capitalise on the ground-breaking technological advancements of our time. Scandals, recalls and failures have plagued the global food and pharmaceutical supply lines for years, clearly demonstrating that this problem has become a moral issue, not just a practical one.”

The token crowdsale will take place from  September 15 to October 12 and will be capped at 100 million CHF (about $100,080,000). Participants can use ether and major fiat currencies to participate in the sale. The Amber token (“AMB”) conversion will take place at the token sale rate of 1 ETH = 1000 AMB which will be the price of AMBs at the public token sale on September 13.

“Proceeds secured through our crowdsale will continue to fuel the development of a better ecosystem for the global commodities markets. Given the enormous scope and far reaching potential of this project, we have set a hard cap at 100 million CHF, which opens the door to widespread community participation,” further stated Versetti.

Ambrosus launched the P2P Marketplace earlier this month in line with its mission to create value in the global food market. The marketplace allows buyers to browse a variety of bids from worldwide food producers and track the conditions and quality of this food at each phase of creation and throughout the transportation process.

Zug, Switzerland-headquartered Ambrosus is the first blockchain project to become an official partner of the United Nations 10YFP, which is responsible for the implementation of the Sustainable Development Goals. The company is also officially endorsed by EIT Food and SQS (Swiss Quality and Safety Association) and has received financial backing from the Government of the Canton of Vaud, Switzerland.

Edit: In a previous version of this article, Ethereum co-founder Gavin Wood was mentioned as the technical advisor of Ambrosus. Wood is not personally involved in the project. Thanks to Wood-led Parity Technologies, which is actually the technical advisor to Ambrosus and which informed CoinReport about the error, the correction has been made.

Cryptocurrency complaints to rise by 5,971%, yet stay proportionally small