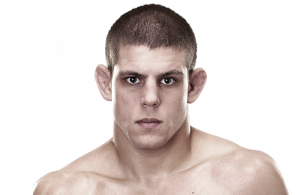 There is an on going debate in the /r/bitcoin community on whether or not a UFC fighter should be sponsored by Bitcoin. A user by the name of bruce_fenton recently posted on Reddit about Joe Lauzon being the perfect choice as the UFC fighter. It turns out that Lauzon is interested in the potential sponsorship. However,  there hasn’t been anything confirmed as of yet. Bruce_fenton is looking to see whether Reddit users are serious about the idea of sponsoring a UFC fighter with Bitcoin.

He asks that users do not send any money yet, and if something is agreed on with Lauzon, a video will be posted to show proof that the contributions were actually given. Just as how Andreas Antonopoulos was able to make a video for the Dorian Nakamoto fund, bruce_fenton hopes to do the same.

Some Reddit users readily agreed with the idea of  using bitcoins to sponsor Joe Lauzon in order to promote Bitcoin awareness. However, a some users were concerned about the amount of exposure one would get from sponsoring a fight. A user explained that the amount of exposure should be parallel to the sponsorship cost. If it’s only for a few hours, the exposure time might not be worth the money.

Other users were not too happy with the idea of promoting Bitcoin as a currency. One such user asked what the point for exposure even is and mentioned that Bitcoin can reach wider audience through the development of different services. In response to this, a user wrote,

“Most people have no idea what bitcoin, digital currency, etc are and cannot understand how they even work. Likewise there is not going to be much development for bitcoin without a demand for it. Bitcoin is still small. You need to approach it from both ends, bitcoin does need marketing.”

A few other users were concerned about Bitcoin being linked to violence. One user was wondering if it is the best PR move for Bitcoin to sponsor a UFC fight. Bruce_fenton responded explaining that the UFC is mainstream and other sports like hockey and football are also violent. UFC’s sponsors range from a variety of different businesses including restaurants and food labels.

Besides the debate on whether it would be a wise move to sponsor Bitcoin through a violent sport, or if Bitcoin should be promoted at all, other redditors just want to see different action. One user wrote,

“Why not just sponsor another NASCAR racer? Doge vs Bitcoin. Sounds pretty epic to me. :)”

At this point, a concise decision has not been made. However, the debate has brought up some key issues: Should Bitcoin be promoted as a currency through sponsoring sports or things of similar nature? Is it ok for Bitcoin to be linked to the UFC? Lastly, will Dogecoin and Bitcoin ever battle it out? The jury is still out on that one!