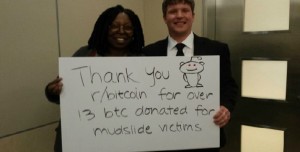 This charitable act has been noted on the r/bitcoin page with a post by a user showing a picture of Whoopi Goldberg holding a sign that says,

“Thank you r/bitcoin for over 13 btc donated for mudslide victims.”

The donations will be used to help the mudslide victims get food, shelter, clothing, and other necessities that were put at risk because of the natural disaster. According to the official donation page, the Darrington Community of Washington has gotten food, water, and clothing. Therefore, the focus is now to provide housing, transportation and medical needs. The community thanked those who provided for them at a time of hardship. 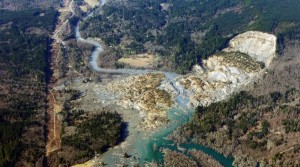 What Happened in Washington?

On March 22, 2014, a mudslide occurred in Oso, part of the Snohomish County area of Washington. According to AP, the mudslide reached a whopping 135 feet wide and 180 feet deep before 11 am on that day.

The natural disaster devastated the town of Oso and affected nearby regions as well. In fact, the mudslide dammed a river which had caused flooding to occur. State Route 530, the direct route to Darrington, was also blocked by the mudslide.

The death toll, as a result of the mudslide, reached 33 people. This natural disaster has caused many problems for the residents in the area. The people have lost their homes, family members, transportation, clothing, belongings, and much more as a result of it.

In order to help out the victims, donations were formed and given to the respective areas and people involved. As such, the Darrington community, which was also affected by the mudslide, created a homepage that allows people to donate easily. On donation page, there is a “donate here” button and also a “donate bitcoins” button. This has made it easy for Bitcoin users to donate to the victims of the mudslide.

The donations were collected by Andreas Antonopoulos in hopes to help Dorian Nakamoto with legal fees, health fees, and other expenses. Nakamoto is known to be recovering from prostate surgery in 2012 and a stroke in 2013. The Newsweek article had disrupted Nakomoto’s life and caused him and his family distress.

We at CoinReport are proud of the r/bitcoin community as well as all those that donated to Washington mudslide victims! 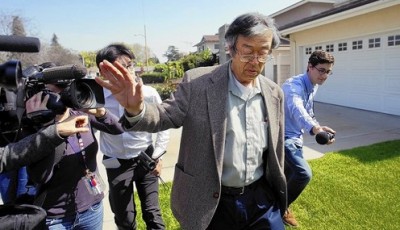