In a presentation today at FOSDEM, a conference for free and open source software developers, the creators of OpenBazaar, introduced their technology and talked about their timeline for development and release.

In the video, the developers mention that the 4.0 release, which includes a change to rUDP, should be out in the next few days. This patch is intended to improve the stability of the network as a whole, and constitutes a major release. The 5.0, which is primarily a UI improvement intended to make the software more accessible, will be out in mid march. They also specified that the official release of the software, which will be useable by lay-people with an operational knowledge of Bitcoin, ought to be out by “late spring.”

If you aren’t aware of OpenBazaar, you should be. OpenBazaar is a fully decentralized cryptographic application that allows users to buy and sell goods anonymously and trustlessly, without a centralized arbitrator, all using Bitcoin. It’s the Silk Road, eBay, Amazon, and Etsy, all rolled into one, and it’s clearly the future of peer-to-peer commerce. The software developers have been quiet for a while (developing a large-scale and secure cryptographic platform is difficult, and takes time), so having even a tentative release schedule is very promising.

You can see the current release (and contribute code, if you want) at the OpenBazaar Github. 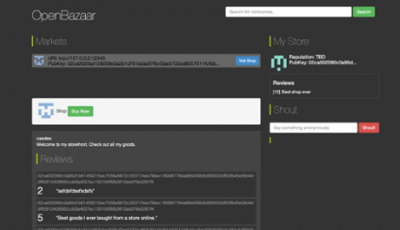