Imagine you want to build a new house. Your old one is behind the times, and you yearn for the new gadgets, features, and technology. You find a guy on the internet who says he’ll build you a brand new house, part of a new trend in houses. It will have all the bells and whistles, next-generation features; you’ll be the toast of the neighborhood! The guy doesn’t want to give you his real name, but that’s cool, right? He has a “team” based in a few different countries. He can’t tell you their names either, or where they are located. But it’s such a cool project, and all it costs is $100,000! Welcome to Munnecoin, brought to you by “Dev Plus” and team.

What is Munnecoin? Well, it’s pronounced “money coin,” so let’s clear that up from the start. It’s an initiative by “Dev Plus” to develop and market a coin and “Munne University.” Quoting from their own site, the coin “was created as a real alternative to become the number one digital currency. It has been developed with the best current features.” What exactly are those features? Well, don’t you worry about that. They’re current and best, OK? In addition, the Munnecoin team states, “We want to take the right steps to achieve our main goal, which is the massive adoption of Munne.” So the express purpose of the coin is to get adopted, and presumably that means going mainstream. Munnecoin faces stiff competition in the incredibly innovative field of digital currencies. Of the big-name rivals that come to mind, Ripple, Stellar, Ethereum, and Bitcoin boast impressive development teams, wide support, and venture capital backing. What innovation is Munnecoin bringing to the table? We haven’t been told, but I suspect it’s none.

To compound the surface and issues with Munnecoin, the mechanism the development team chose to fund its work was an ICO, or initial coin offering, through Bittrex. They sold Munnecoin for bitcoins, which have then presumably been used to pay wages and expenses, raising at least 260 BTC, around $100,000* of funding in October of 2014. Let’s compare that to the market cap of Munnecoin lately, which is sitting around $20,000 Using an ICO is an immediate red flag for a coin development team. If the merit of a coin, which should be some form of innovation or usefulness that is not currently available, or not currently massively or easily available, is not significant enough to gain funding through conventional means, why should a community buy into the project? A traditional start-up doesn’t start up by offering an IPO; that’s insanity! 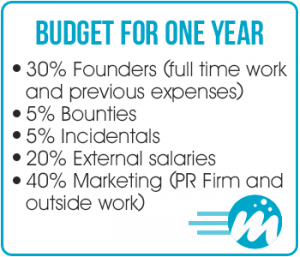 The Munnecoin team reported that only 30% of the ICO would be spent on supporting the team, a measly $30,000 that the founders will earn for working on the project.

So let’s recap this so far. It’s a coin called Munnecoin, pronounced ‘money coin’ with an unknown and unverified group of developers, who have gathered about $100,000 to fund their project, which currently sits at a market cap of about $20,000, and are admittedly paying themselves $30,000 for the development of a coin which offers no clear innovation, and aims only for massive adoption. I now think I am in the wrong business. In fact, I will “develop” a coin and educational materials at the relative bargain price of $10,000 as long as I can go under the name “Dev Megaplus” and never identify myself or be held accountable. What can go wrong?

The technology of digital currencies, whether a currency or the underlying block chain-style foundation, is still in its infancy. So too is the community that is excited about the potential of all the recent innovation; and the potential for financial gain. We’re building a house, to continue the metaphor. If we want this structure to last, the community must demand better accountability from any people or groups that are asking for investment. My hope is that Munnecoin and “Dev Plus” are simply inexperienced in their approach to doing business, rather than malicious. But the history of digital currencies does not bode well in that regard. Good luck getting your “Munne” back.

*The initial amount stated was incorrect, and has since been corrected.

A Look at Yellow