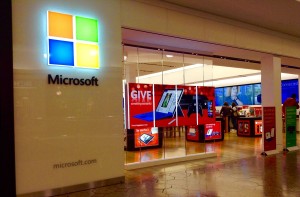 Front of a Microsoft Store

Microsoft has announced it has no plans to drop support for bitcoin for purchases on its online Windows and Xbox stores after reports suggested it had quietly withdrawn support for the digital currency, reported International Business Times (IBTimes).

Several media outlets reported Monday that Microsoft had discontinued its bitcoin payment option, pointing to an update on Microsoft’s website stating that users could “no longer redeem bitcoin” into their account. However, the company has since clarified the matter.

“We continue to support bitcoin for adding money to your Microsoft account which can be used for purchasing content in the Windows and Xbox stores,” said the company in a statement e-mailed to IBTimes. “We apologize for inaccurate information that was inadvertently posted to a Microsoft site, which is currently being corrected.”

IBTimes reported that Microsoft is exploring the potential of blockchain technology. According to the publication, Marley Gray, Microsoft’s director of technology strategy, said there is no shortage of blockchain developers looking to join the company’s blockchain initiative and the plan is to have a “certified blockchain marketplace” in operation this spring, with those participating having to go through more stringent testing than what is currently in place.