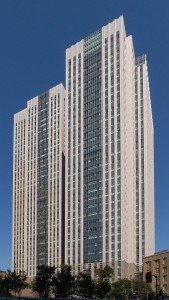 The Kasumigaseki Common Gate is twin tower buildings located in Kasumigaseki, Chiyoda, Tokyo. The buildings consist of East Tower and West Tower. The Financial Services Agency (FSA) occupies the lower half of the West Tower.

On Tuesday, Japanese financial regulators proposed treating virtual currencies the same as fiat currencies, according to a report in the Nikkei Asian Review.

Currently, virtual currencies are recognized as “objects,” but are not treated the same as established currencies. The proposed legislative revisions, by the Financial Services Agency (FSA) to be exact, will be made during the current ordinary Diet session. The goal is to have the proposal passed by the end of this current term.

The criteria included in the proposed revised definition for virtual currencies are:

The FSA believes this will help grow fin tech sector while also protecting users and investors. Under the proposed legislation, institutions dealing with virtual currencies would have to register with the FSA, thus keeping them under government oversight. These precautions come after the bankruptcy and investigation of MtGox, formerly the world’s largest bitcoin exchange. According to the Nikkei report, “Creating a legal framework will allow virtual currencies to spread more safely.”

Japan’s proposed changes are the latest in a growing trend of national governments recognizing the growing significance of virtual currencies. Earlier this week, the Reserve Bank of Australia announced the possibility of the Australian Dollar going digital in the future.