Why Jamie Dimon is Wrong About Bitcoin 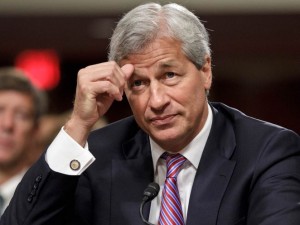 In an interview with a CNBC’s news reporter, Jamie Dimon, the CEO of JP Morgan believes that the Bitcoin frenzy will eventually die out. Due to the fact that bitcoin does not have government involvement, Dimon does not see it lasting. He says,

“It doesn’t have the standing of a government, and honestly, a lot of it — what I’ve read from you guys — a lot of it is being used for illicit purposes. And people who will get upset with it is governments.”

Speaking of illicit purposes, and governments getting upset, Dimon himself isn’t new to the limelight for this regard. In fact, in 2012, it was reported that JP Morgan had bet huge amount of money on financial instruments and covered up the losses when everything went downhill. This scandal known as the London Whale went mainstream with critics blaming Dimon for his failure in maintaining safe practices. London Whale accounted $6.2 billion losses in 2013. This poorly managed and high risk trading cost JP Morgan $920 million in fines. Dimon, however, referred to high risk trading as a “tempest in a teapot” before the scandal was exposed. He later regretted his choice of words, and was somehow able to escape this scandal mostly unscathed. Perhaps he should remember his own money dealings before talking about Bitcoins’.

In addition, a currency that is worth anything can one day be targeted by people who wish to use that currency for improper means. This could be the USD, the Euro, the Yen, or any other type of currency. Of course, Dimon would know a thing or two about this wouldn’t he? Bitcoin is not necessarily the harbor for illegal things; in fact any currency that holds value can be used. From this, it seems Bitcoin is getting the flack because it’s fresh on the market, and some find it difficult to determine what to do with it.

“Governments put a huge amount of pressure on banks: know who your client is, did you do real reviews of that. Obviously it’s almost impossible to do with something like that.”

I guess Dimon and JP Morgan forgot to do reviews of clients in the London Whale scandal. It did cost them quite a bit of money too. Perhaps he probably doesn’t remember the incident well.

From other people’s perspective, the lack of governmental control is what appeals to them. This is because they do not want a third party in their transactions. In addition, the way Bitcoin is at the moment, with its block chain that allows everyone to see each transaction, it is really hard to fraud or cheat anyone in this crypto currency. Bitcoin is self sufficient, in that it does not need an authority to oversee it. Sure, there are risks involved due to the lack of governmental intervention, but even in regular non-digital transactions there is always a risk.

“They will eventually be made as a payment system to follow the same standards as the other payment systems and that will be probably be the end of them,”

It is really hard to determine how this would play out, since at the moment countries around the world are debating on what to do with digital currencies in general. However, the appeal of Bitcoin is its decentralized nature which ensures power to the user. In addition, the Bitcoin protocol cannot be changed from the way it is now. It depends on how governments wish to deal with it, but even if they try to regulate it by taxing, whatever Bitcoin has to offer will remain intact.