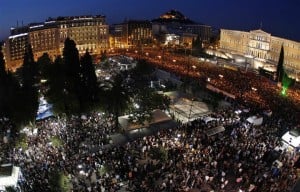 Greece Uprising. Image of the Syntagma square garden. 100.000 people gathered at the centre of Athens on Sunday, 29/5/2011. It was the first day of the people’s protest against IMF in european cities.

With banks closed as Greece heads toward defaulting on its International Monetary Fund loan, worried Greeks are turning to online trading platforms to see if Bitcoin is a better option than the euro, reported CNNMoney.

Major Bitcoin exchanges told the news outlet they have seen a spike in business from Greece. Ten times as many Greeks are signing up to trade Bitcoins on the German marketplace Bitcoin.de than usual, said CEO Oliver Flaskaemper to CNNMoney. Bitcoin trades from Greece have risen by nearly 80 percent from their ten-week average on Bitstamp, the third-largest exchange in the world. Trading platforms in China are also garnering interest from Greek citizens. Shanghai-based LakeBTC is experiencing a 40 percent increase in visitors using computers in Greece.

CNNMoney reported that over the weekend, Polish exchange Bitcurex was flooded with emails from Greeks, asking if Bitcoin was a legal currency in the European Union and whether the exchange had a Bitcoin ATM network in Greece. The company then began marketing directly to Greeks on its website, offering zero fees for Greek consumers.

CNNMoney noted it’s quite hard to acquire Bitcoins. There’s just one Bitcoin ATM in Greece, located in an Athens bookstore. And the most common method of obtaining Bitcoins – buying them from an online marketplace – requires sending a wire transfer from a bank, but Greek banks are closed.

But it’s not impossible. Bitcoin.de told CNNMoney that some Greeks are managing to acquire Bitcoins because they still have access to online banking. LakeBTC said Greeks can attempt to find local “LakeBankers” who are willing to sell some of their Bitcoins using bank notes or PayPal.

Another challenge is there are few places in Greece to spend Bitcoin. According to BitcoinMaps, there are just a half a dozen places in Athens that accept the digital currency.

Filip Godecki, a spokesman for Bitcurex, said it’s not realistic to think Greeks will suddenly drop the euro and start doing business in Bitcoin.

“I’m not so sure Greeks will start buying cheese with Bitcoin on Wednesday,” said Godecki. “But I think something changed in their minds [with the bank closures]. Greek people will start thinking about fiat currencies as something not so safe for savings.”

Bitcoin’s price volatility should not deter Greeks, Godecki said. Or concerns that Bitcoin is not real money.

“You can’t be cut from Bitcoin. It can be much more real than the inaccessible money in the bank.”

On the matter of price, BitPay co-founder Tony Gallippi tweeted on Sunday that he expected the price of Bitcoin to increase to between $610 and $1,250 if Greece drops the euro, reported The Guardian.

In a blog post published Monday referencing the events in Greece, Coinbase announced that this week its customers buying and selling Bitcoin with euros will have their fees waived. The offer is available through the end of day on July 5th. Coinbase offers customers the ability to buy and sell Bitcoin with euros in more than 20 European countries, including Greece.