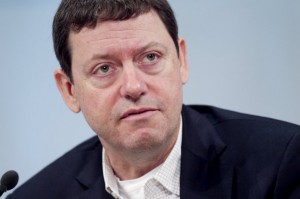 Fred Wilson, a Bitcoin enthusiast and Union Square Ventures founder, spoke at the TechCrunch Disrupt conference on May 5th during the opening discussion. The legendary Venture Capitalist talked about the virtual currency investments he and his company are thinking about at the moment. It seems that Fred Wilson is most interested in what the impact of the Bitcoin blockchain will be long-term wise.

The University of Pennsylvania and MIT graduate said that he is still strongly interested in Bitcoin and companies related to it, but feels that the Bitcoin protocol holds greater value. He said,

“Right now you need someone to be the arbiter of identity – either Facebook, Twitter or Google – somebody who developers can use for login and other information sharing. I think you could do the same thing with a block-chain architecture, where there is no third party, there is no clearinghouse of identity information.”

Even though Wilson did not reveal any new Bitcoin projects, he does believe that someone from the digital currency community will come out and disrupt the online identify sphere. One of the companies that was mentioned regarding this matter was OneName.

OneName is unique in that it combines both the Bitcoin and Namecoin block chains in an open-source platform to give a new sort of identity service to developers. The OneName proposal was launched towards the end of March and has since gained popularity.

Wilson also mentioned in the conference that Union Square Ventures will not provide early seed investments to companies. He said,

“We’re not going to invest until we see real uptake.”

This was stated even though Fred Wilson has been known for being outspoken about Bitcoin and the industry’s potential. At the conference, Wilson tamped down any expectations that he will be providing early seed investments. As such, Union Square Ventures will be continuing its plans with the Bitcoin industry and tech space without giving investments until an uptake is seen.

More information regarding TechCrunch Disrupt NY can be found here.