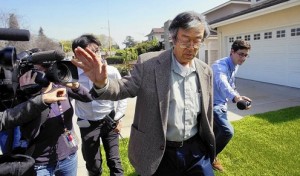 Dorian Satoshi Nakamoto, who was the subject of the March 2014 Newsweek cover story “The Face Behind Bitcoin,” is raising money online to fund a lawsuit against the magazine, report several news outlets.

CNN Money reports that the 65-year-old Japanese-American claims he has nothing to do with Bitcoin’s creation (the mysterious creator had identified himself as “Satoshi Nakamoto,” which had been popularly assumed to be a pseudonym), and states that Newsweek “must be held accountable for its reckless reporting.”

CNN Money reports that Nakamoto acknowledges that a number of details in the Newsweek article, written by Leah McGrath Goodman, are correct, including his engineering background and the fact that he once worked for a defense contractor. However, Nakamoto maintains that the basic premise about his role in Bitcoin’s creation is completely false.

The California-based Nakamoto is accepting donations, including in the form of Bitcoin, through a website: newsweeklied.com. His attorney, Ethan Kirschner, confirmed to Business Insider that his law firm, Kirschner and Associates, is “responsible for the website and the fund.”

On Newsweek Lied’s “Background” page, which includes links to criticisms about the article, the website states:

“The article’s conclusion is false. Dorian Nakamoto is not the inventor of Bitcoin. He has never worked on Bitcoin. Newsweek and Leah McGrath Goodman, the article’s author, should have – and may have – known this conclusion was false, or at least highly unlikely. Newsweek’s article terrorized both Dorian and his family, all of them private citizens.

In addition to the article’s false conclusion, it contains misstatements of fact and invented and altered quotes from Dorian and his family members. This is not the first time these allegations have been made against the article’s author. In addition, in an interview after the article was published, the author appears to have wholly invented an additional conversation with Dorian supporting her version of events.”

The website states that although Newsweek appended a statement Nakatomo issued to the article’s online version, the magazine did not retracted the article, nor did it apologize or compensate Nakamoto and his family.

The site includes personal information about Nakamoto and describes the effects the article had on his family.

“Dorian suffered a stroke in October 2013. His recovery is ongoing. He is separated from his wife, lives with his 93-year-old mother, and has been unemployed as an engineer for at least ten years. Though he continues to look for work, he is experiencing ‘severe financial distress,’ in his own words, and has significant trouble meeting his basic needs. He cancelled his internet service in 2013 because he couldn’t afford it.

“Dorian’s family was confused by Newsweek’s article. He and his brothers were misquoted. In some cases, words were attributed to them that were never said. In the chaos, his mother believed that the authorities were planning on removing her from her home to put her in a care facility. His estranged wife and children were alienated by the story, which portrayed a person and situation different from their understanding of their husband and father.”

Business Insider reports that Nakamoto is not trying to legally defend himself; donated funds go toward his attempt to sue Newsweek over Goodman’s article.

“Dorian’s Legal Defense Fund is a separate effort, authorized and endorsed by Dorian, to raise money to hold Newsweek accountable for their article,” states Newsweek Lied. “A lawsuit against Newsweek will be very expensive. Dorian does not have the resources to pay the costs of such a suit, let alone attorneys’ fees. Monies raised by the Fund will be used to further Dorian’s legal claims against Newsweek; anything remaining will be given directly to Dorian for his expenses. “

Newsweek Lied notes the Bitcoin community has donated approximately $23,000 worth of Bitcoins to Nakamoto for his personal use. “He is extremely grateful for this gesture,” the website says.

In an article about Newsweek Lied, Vox.com asks: “Why would the Bitcoin community donate to support Dorian’s lawsuit?” The article explains that “many in the Bitcoin community see the Newsweek’s story as a symptom of the mainstream media’s clumsy treatment of Bitcoin more generally. Bitcoin is a complex, technical subject; it has been widely misunderstood and even mocked by mainstream journalists.”

A couple of news outlets point out the challenges Nakamoto faces in his fight against Newsweek.

CNN Money reports that he could have a hard time wining his case, given the extensive free speech protections granted to the media.

“The First Amendment and Supreme Court decisions protect the news media in their reporting on matters of public interest, so you really have to show actual malice and disregard for the truth that would be very blatant and very provable,” said Gene Policinski, senior vice president of the First Amendment Center, to CNN Money.

“Nakamoto never admitted to creating bitcoin, and the Newsweek story remained sufficiently vague, allowing the publication to argue that their fishing expedition was an effort at exploring a juicy story rather than identifying the actual creator of bitcoin. ‘Standing before me, eyes downcast, appeared to be the father of Bitcoin,’ wrote Leah McGrath Goodman in her Newsweek piece.

“It will be hard for Nakamoto to convince a judge to agree that ‘appeared to be’ is the same was ‘was.’”