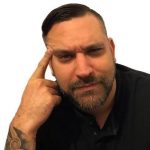 Update: According to the latest press release from Crypto Crow, the show is being postponed if not canceled on the CW and CBS stations due to unforeseen circumstances. The show will now air on TUFF TV and 40 of its affiliate stations, as well as streamed on the Crypto Crow Roku Channel. A news report on the latest is here.

Digital currency YouTuber and investor Jason Appleton, known on YouTube as Crypto Crow, announced in a press release CoinReport received the streaming of his bitcoin show on Roku to 30 million homes in June 2018. The show is funded by bitcoin.

Appleton uploaded his first video on YouTube as Crypto Crow in November of 2017, when he was a VP of sales for a mortgage firm. His following on YouTube irrupted to 70k devoted subscribers within just three months as he disclosed how he evaluates ICOs and revealed how he had turned a $3,500 investment into more than $90k in just two months.

The agreement between Appleton and CBS Television Networks was of 13 episodes of the Crypto Crow Show in select markets as a test market in anticipations of disseminating on a national scale.

The Crypto Crow Roku Channel, which is now available to 30 million U.S. homes, will be streaming the episodes.

Each episode of the show will present information centered on assisting new comers to the digital currency space with researching, investing and staying safe while showcasing ICOs and digital currency firms and how they make an impact to the industry.

According to the press release, episode topic schedule is:

Episode 1: What Are Cryptocurrencies?

Episode 12: The Future Of Cryptocurrency

Episode 13: A New World Of Crypto

Unedited versions of the episodes could be watched on Appleton’s YouTube channel.

All publicity sponsors, features and the like are funded by bitcoin.