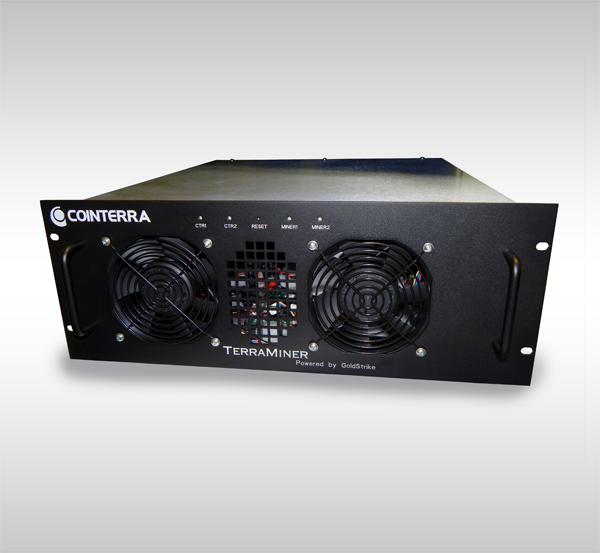 CoinTerra has finally begun shipment of their 1st batch of bitcoin mining hardware known as the TerraMiner IV. The new hardware was intended to exceed hash speeds and limitations of what is available on the mining hardware market today. However, the product being shipped is an inferior version than what was initially promised by CoinTerra.

The TerraMiner IV’s performance was promised to operate at two terahashes per second. Instead of functioning at two terahashes per second, anticipators were let down when they learned that the hardware only reaches a max of about 1.7TH which is about 15 percent less than 2TH. Although, this is still an improvement from older mining hardware, consumer expectations weren’t met and that’s not the end of it.

Designed and constructed in Austin, Texas, the first unit was presented to customer Jake Gostylo. CEO and founder of CoinTerra Ravi Iyengar and his team joined Gostylo in celebrating the sale of the first TerraMiner IV machine at the company’s headquarters. Iyegar said:

“Handing over the first TerraMiner marks a major milestone for CoinTerra. It goes to show that through hard work and determination with the right team in place, great things can be accomplished in an incredibly short time frame.”

Gostylo was ecstatic to be apart of the moment, and to be the first TerraMiner owner.

The TerraMiner IV is comprised of a 28nm GoldStrike I processor, the most powerful SHA256 ASIC released to date. Initial expected specifications of the power draw of one TerraMiner IV were roughly around 1200w. Which would have run perfectly fine from just one outlet in most residential homes that run off of 15Amp circuit breakers. However, the electric power consumption of the TerraMiner IV being shipped today is roughly between 1900w to 2100w which will not run off of just one outlet using a 15Amp. Customers will need to run their TerraMiner off of 2 separate 15amp outlets for it to run efficiently and consistently.

To make up for the disappointments and delays, CoinTerra is offering a 15% discount:

“For January or February batch retail customers who wish to receive their TerraMiner order in the currently-shipping specification we will offer a 15% discount coupon* redeemable against their next retail hardware order placed at the CoinTerra website store.”

Orders for CoinTerra’s mining hardware are filled through April 2014, however, CoinTerra is still taking orders for its May delivery at $6000 per unit. Though promises fell short, the price tag might still be enticing compared to other mining hardware out there. Only time will tell whether or not it will be enough to make a return on investment for those purchasing it.

With a great number of orders being placed, CoinTerra is going to have to get their act together to assure future customers that they are a trustworthy company to do business with.

If CoinTerra is unable to do so, it will leave a wider opening for competitors like KnCMiner to take more of the market demand.

For more news on mining hardware, stay tuned with Coinreport.

NYS Regulator Benjamin Lawsky on The Future of Bitcoin