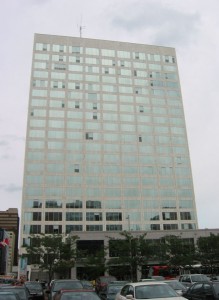 One of the two towers of L’Esplanade Laurier, headquarters of Canada’s Department of Finance in Ottawa, Ontario.

A newly disclosed memo from Canada’s Department of Finance warns that the high level of anonymity and lack of regulations with respect to Bitcoin transactions may make the cryptocurrency “an attractive payment method for criminals.”

Obtained by the Canadian Press, the internal memo, prepared in May 2013 for then-finance minister Jim Flaherty (who passed away in April), states that while the level of illicit activity regarding Bitcoin is not clear, some have expressed concerns about its potential to fuel criminal behavior.

“Virtual currencies such as Bitcoin has been criticized for their potential to fund illicit activity, such as money laundering and terrorist financing.”

The memo also states that while digital currency schemes can foster financial innovation and offer alternative payment options, they also lead to risks for consumers. It says:

“For example, there have been a number of security incidents in which Bitcoin wallets or other infrastructures have been compromised. These incidents have exposed users to either theft of Bitcoins or theft of personal information given to Bitcoin exchanges.”

The memo is among several internal notes – including an analysis by the Royal Canadian Mounted Police – illustrating concern among government officials about Bitcoin and other digital currencies.

A finance ministry presentation on Canada’s digital currency landscape outlines several characteristics that could spur criminal activity, such as the ability to purchase the currencies with cash, the ease of moving virtual funds across borders, the lack of restrictions on deposits and withdrawals, and pseudo-anonymity.

The March 2013 RCMP report concludes that Bitcoin signifies a new means to launder crime proceeds “under a new cloak of anonymity,” creating obstacles for investigators.

Speaking with the Canadian Press, Christine Duhaime, a lawyer and certified financial crime and anti-money laundering specialist, says that since Bitcoin transactions are digitally recorded, authorities “can usually figure out” who has conducted a transfer, but it currently needs considerable effort to do so, burdening police resources.

In his final budget tabled in February, Flaherty announced measures to add Bitcoin transactions within the scope of the country’s anti-money laundering law.

The new rules, which received royal assent in June, mean Bitcoin transactions likely will be treated similar to other financial services in the eyes of Canadian law, subject to record keeping and verification processes, as well as obligation to flag suspicious transactions, says Duhaime.

She says that too much regulation could hamper development of new computer technologies that will revolutionize the financial services industry.

“Everyone’s looking at the way the Bitcoin protocol works because it’s so much less expensive and so much more seamless, and kids love it and that’s the way we’re going. So the danger is, if we overregulate this, we’re going to lose the technology we’re developing in Canada.

It’s fantastic technology, and the other side, though, is it does have some financial crime risk.”