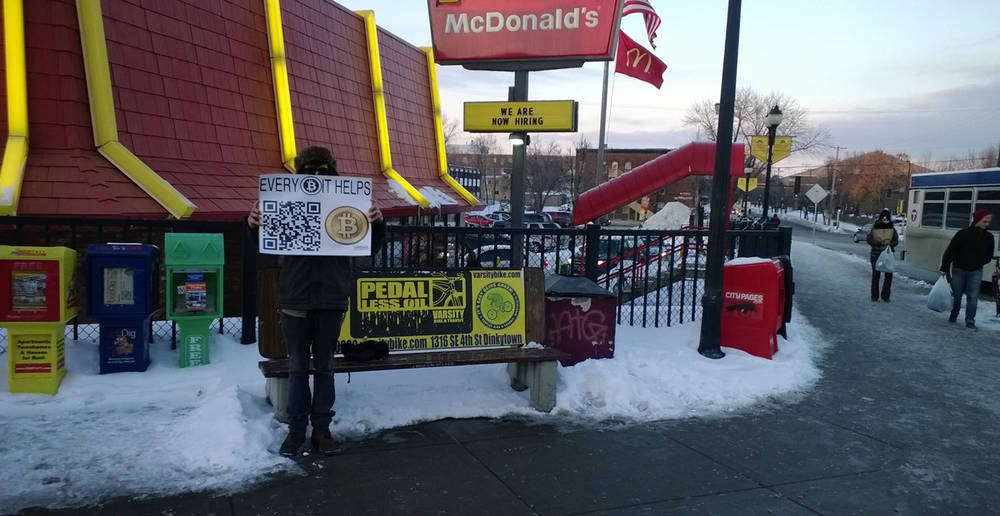 Homeless Man Begs for Bitcoin in front of McDonald’s.

Minnesota -A homeless man was found begging passer-byers for bitcoin donations. He was spotted asking for the digital coins near by the University of Minnesota. His sign reads “Every Bit Helps”, emphasizing his acceptance of bitcoins.

When approached by the man, people are asked to deposit small donations into his digital wallet.

Thanks to the Reddit community, the man’s story has been making headlines and he has been gaining support since. The post gained over 500,000 views.

After the photo was posted, the man has received over $44 worth of bitcoin. Reddit user Jadellama indicated that the man had no permanent residence and told her that he could not find himself a job.

Bitcoin Donations for the Homeless

Other homeless people are no strangers to the bitcoin currency. Wired.com reported on an article about other homeless people’s struggle for survival and that they too take in the digital currency. Paul Harrison, Chris Kantola, and Jesse Angle are homeless men who use a video rewards service similar to the concept of SwagBucks.com, to earn bitcoins for every video they watch.

Each video viewed earns them 0.00004 bitcoins, worth 0.03 dollars. Though it doesn’t amount to much, the videos keep the men busy, while they earn a few extra bucks.

This method of earning bitcoins is more of a task then it is a donation, but is a creative way to utilize bitcoin.

Another implementer of bitcoin donations is founder of Sean’s Outpost Jason King. King’s Pensacola, Florida-based outreach center assists the homeless by providing them food and a support network of other homeless people.

The homeless advocate is currently running across America, from Miami Beach, Florida to San Francisco, California, in the hopes of gaining 1,000 bitcoins in donations to use for his outreach center.

To make donations for the King’s Bitcoin Across America campaign, click here.