On December 9, Ziftr, a New Hampshire-based company that aims to revolutionize the online shopping experience with a suite of tools, applications, and products, announced the presale of its own cryptocurrency: ziftrCOIN. The coin is designed to bring on board the next 10 million digital currency users and to help the firm fulfill its goal of bringing cryptocurrency into the mainstream for consumers and retailers.

Running until January 23 (or sooner, depending on when the coins run out), the presale started at 1 BTC for 1,600 ziftrCOINs and will gradually rise to 1 BTC for 533 ziftrCOINs, though presale participants can spend less than one Bitcoin if they wish (as of this writing, the rate is 1 BTC for 1,360 ziftrCOINs). According to a press release sent to CoinReport about the presale launch, presale participants have the chance to receive rewards for their contribution, ranging from ziftrCOIN swag to mining rigs to an all-expense-paid trip to Ziftr’s office for an exclusive planning session. 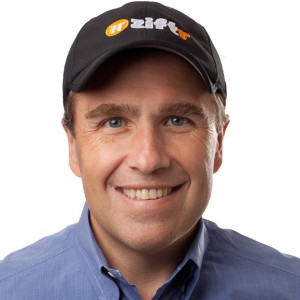 “When we started looking into cryptocurrency, we saw all of the real benefits the technology could offer to consumers as well as retailers,” said Wilkins. “As we got more and more into this, however, we found that there were still some major barriers for mainstream adoption, specifically 1. It is currently too difficult for the average consumer to get into cryptocurrency and get coins, and 2. Consumers still don’t understand the concept of altcoin and how to use it.”

Wilkins said Ziftr determined that the ideal approach to educate people about cryptocurrency and get them engaged was not to tell them about the benefits, but to incentivize them to try using it. Through research the company figured that a $100 value was enough to really get people interested in trying something new. While Ziftr wished it had enough Bitcoins to give away $100 worth to millions of consumers, the truth is that it doesn’t, said Wilkins. Instead, the company used its expertise in e-commerce and development to provide consumers with the same $100 incentive through a new altcoin, which led to ziftrCOIN’s creation.

Following the presale, all purchased ziftrCOINs will become available for use in February. In late 2015, Ziftr will give away 300 million complimentary ziftrCOINs (up to 100 ziftrCOINs per person) so that everyday consumers can start familiarizing themselves with digital currency. Each coin will have a redemption value of at least $1 when used within Ziftr’s retail work, functioning like a coupon.

“We are confident that $100 worth of free money is an effective incentive to persuade people into trying something new and hopefully become active users of this great technology,” Wilkins said.

Within the first 10 days of the presale, Ziftr sold 3.6 million ziftrCOINs for a total of $500,000 USD. According to the press release, this includes a $150,000 purchase of coins from 10x Venture Partners, a New Hampshire-based traditional investment firm, on the presale’s first day.

“We believe strongly in the future of cryptocurrency in general and the unique position Ziftr holds the bridge the gap between mainstream consumers and cryptocurrency adoption – particularly for online commerce,” said John Gargasz, manager at 10x Venture Partners, in the press release. “ziftrCOIN is one component of a comprehensive Ziftr strategy which we look forward to see playing out over the coming year.”

Prior to its ziftrCOIN presale, Ziftr released in November the Beta version of ziftrWALLET Mobile for Android, a digital wallet that holds Bitcoin, Dogecoin, and Litecoin, with other altcoins, including ziftrCOIN, to be added soon. Wilkins told CoinReport that there are hundreds of new coins in the cryptocurrency realm, all of which offer users various benefits, and Ziftr didn’t want to limit users to only one coin when there are many useful altcoins people would like to use.

“Currently there are only a few mobile multi-coin wallets, and even fewer with the full feature list,” Wilkins said. “Therefore, we decided to make one ourselves with the focus on making the first multi-coin that combines the security and control of a desktop wallet with the speed and convenience of a cloud wallet.”

Other altcoins ziftrWALLET will hold include Primecoin, Peercoin, and SmartCoin. Wilkins said his company bases its decision on which coins the wallet will hold on a number of factors, such as market cap, liquidity, and available supply. Ziftr is actively seeking community feedback as it continues to add new coins.

The feedback the company has received since the ziftrWALLET’s Beta launch has been invaluable, Wilkins said. Thanks to testers the first round of bugs has been identified and is being fixed. General reception has been positive, with the multi-coin feature and the live altcoin-to-USD exchange value being the most popular features so far.

ziftrCOIN is not trying to compete with Bitcoin and other cryptocurrencies, Wilkins said; his company is trying to help raise the value of all coins and boost digital currency adoption rates.

“By using ziftrCOINs as the gateway coin into cryptocurrency for the next 10 million users, we are hoping to effectively introduce people to the benefits of this great technology and create one seamless experience where people can play around, shop, and sell using the different types of coins they want,” said Wilkins (detailed technical information is laid out in a ziftrCOIN white paper). Guaranteeing that ziftrCOINs can be redeemed for at least $1 in a Ziftr retailer’s network will give everyday consumers a real use case for this cryptocurrency, Wilkins said.

Getting into cryptocurrency can be an obstacle for average consumers, who must do a lot of work to educate themselves, acquire coins, and search for places that accept those coins and understand how those different checkout experiences operate. Ziftr is working to solve such challenges and is on the track in doing so, said Wilkins. “We’ve simplified the concept, given people coins to get started, and have helped merchants to accept them.”

To facilitate merchant adoption, Ziftr has developed ziftrPAY, an API that will enable retailers to easily start accepting Bitcoin, ziftrCOIN, and other cryptocurrencies, along with traditional credit card payments.

“This will change much of how merchants are able to collect payments for their goods and services,” Wilkins said. “There are typically over nine steps to complete a transaction from the time a customer swipes their card to payment processing, settlement, and when the merchant finally gets paid. We have the opportunity to completely restructure this process, with modern technology and great collaboration.”

Ziftr considers cryptocurrency “a truly revolutionary technology that will replace a system that simply wasn’t created for today’s shoppers,” Wilkins said. “Our job is to continuously improve the shopping experience and we believe that cryptocurrency will help us further that goal. By creating ziftrCOIN, along with our full suite of tools and apps, we hope to convert people who wouldn’t have known anything about cryptocurrency into everyday users.”