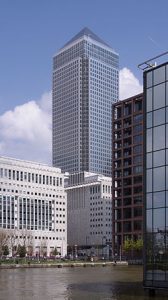 One Canada Square (the second-tallest building in the U.K.),
Canary Wharf,
London, U.K. LBX is located at Level 39 of the building.

One in three Millennials (Generation/Gen Ys) (33%) in the U.K. will be invested in digital currency by the end of 2018, with cryptocurrencies overtaking shares and bonds in acceptance among those aged 18-35, says a poll by London Block Exchange (LBX).

According to a press release CoinReport received, the independently obtained numbers, released by LBX – the only dedicated multi-cryptocurrency exchange in the U.K. – reveal the significant increase anticipated in digital currency possession, impelled by the youth who feel left behind by the property market, pensions and conventional investments.

The poll shows that five percent of Millennials are already invested in digital currency, 11% “definitely” plan on owning in 2018 and an additional 17% are seriously thinking about purchasing cryptocurrencies like bitcoin, ether and litecoin within 12 months.

If substantiated, this will make digital currency a more popular asset than second property (18%), shares (19%), precious metals (19%) or bonds (20%) among the under 35s (percentages of those aged 18-35 holding those financial products or investments, according to ING International Survey on Savings 2017.).

One in eight Gen Ys (12%) stated that digital currency is “their generation’s asset,” says the poll.

Moreover, one in four under 35s (24%) stated they repented not purchasing digital currency before and numerous said they had a colleague or friend who had made a huge profit because of their investments.

Remarkably, the North East of England, which has a growing technology scene, is second only to London in digital currency fervor, while the “stockbroker belt” of the South East of England, Wales and East Anglia is among the least interested.

The older generations, maybe obviously, actively reject bitcoin and other cryptocurrencies. The tipping point between acceptance and rejection for them takes place at the age of 55+, with 57% of this age group stating they will surely not invest in cryptocurrencies.

“This study underlines the gulf between the younger generation’s view of money and that of their parents and grandparents, who had assets perform so well for them in pensions or property,” said LBX founder and CEO Benjamin Dives.

“Millennials clearly feel left behind by the old system and are looking at cryptocurrencies as a new dawn.”