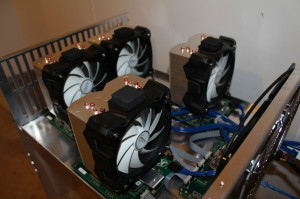 KnCMiner, a mining hardware company, is facing tension from customers because of the company’s delay in shipping of their Neptune mining rigs. Neptune pre-order opened back in December, when it was said to be able to mine over two bitcoins per day. Since then, the difficulty of Bitcoin has risen tremendously over the past few months, which makes it impossible for the Neptunes to make any where near that amount.

Given the situation, some customers have become angry from waiting four months for their mining rigs. KnCMiner customers have taken to BitcoinTalk forums to express their concern and anger with the delay in Neptune shipment.

In light of their anger, KnCMiner has tried to compensate for the situation by offering an additional free Neptune to the customers who have already ordered one. Sam Cole, KnCminer’s CEO said,

“We know that it is getting tougher to successfully mine in this environment and we want our customers to have every advantage we can give them. So to combat the downward trend in mining returns for the customers who have been with us right from the beginning, and to show our competition we mean business, we will be over-delivering again on all orders.”

In the past, KnCMiner has been very vocal about how much money it swept in from orders on its mining hardware. However, it is obviously having difficulty delivering its products to customers. In the Bitcoin mining realm, it is the survival of the fastest. KnCMiner needs to get with the program, and quickly. Sam Cole went on to mention that,

“As miners face growing competition, and the increasing difficulty to mine Bitcoin, we will keep working on creative and unorthodox ways to put the best and most loyal customers on the planet first and provide them with the competitive edge they’ve come to expect from KnCMiner.”

It is good to know that KnCMiner is giving customers an extra Neptune, however, in order to keep customers trust, they need to deliver products on time. Other mining companies have gotten sued because they weren’t able to deliver to customers on schedule.

It was also announced today that KnCMiner has become a Platinum member of the Bitcoin Foundation after paying $100,000 in contributions. The proceeds will go to the Foundation to help carry on its Bitcoin goal.