The platform aims to disrupt conventional restaurant review websites such as Google Places, Yelp, Zagat and FourSquare by presenting an immutable and confirmable blockchain-based user review process that is founded around a crypto-token to incentivize ecosystem participants.

First launched earlier this year for iOS, the Munchee mobile app is a social-networking application for food lovers that focuses on recommendations and reviews of individual restaurant dishes through photos and videos. The app also serves as a marketing channel for restaurants to feature their popular dishes to nearby starving foodies.

The major food review websites mentioned above all share several problems, says the release, adding, but the most noteworthy is false reviews. Dishonest reviews clash with the specified aim of a crowdsourced review website and usually cause low-quality listings. According to a study by Harvard professor Michael Luca, incorrect reviews of establishments in Boston rose from 6% in 2006 to 20% in 2014.

It becomes impossible to prove there is truth in the review and rating system with the closed and centralized platforms operated by Yelp and these other websites, says Munchee. Moreover, adds the firm, reviews on these sites are believed to have been skewed to the negative because of the absence of incentive for the standard end-user. In a nutshell, end-users who have a positive or neutral experience are far less expected to write a review than those who had a bad experience.

Roy F. Baumeister, a professor of social psychology at Florida State University, noted, “Losing money, being abandoned by friends, and receiving criticism will have a greater impact than winning money, making friends, or receiving praise. Put another way, you are more upset about losing $50 than you are happy about gaining $50. … Bad events wear off more slowly than good ones.”

Munchee says the same is true when it comes to restaurant reviews, and when coupled with no incentive to participate following a positive or neutral experience, the reviews of general competition should be called into question.

Munchee says its Peer Review system will be employed to assure that just the quality reviews are admitted in the Munchee ecosystem. Each new submission first passes the peer review by other Munchee users, making the platform truly social and transparent. Using Machine Learning to mine user preferences, Munchee proposes the right reviewers for peer review based on criteria, such as language, location, food preference, food category, etc. Everybody in the ecosystem contributes towards enhancing the platform’s quality via active participation, rather than being just passive user of the content provided by others. This nurtures valuable content and a cooperative community. Such a platform appeals to numerous first-time users, since they cannot merely access trusted content, but also earn MUN tokens by actively taking part in improving the content’s quality and validity.

MUN is a method of exchange inside of the Munchee ecosystem. It is developed to facilitate meaningful promotion and advertising for owners of restaurants while creating a quality foundation of content by rewarding content creators for their activity. The platform will produce a unique economy encircling the Munchee mobile app by rewarding users with MUN for content development and also incentivize restaurants to offer promotions and rewards to Muchee users. 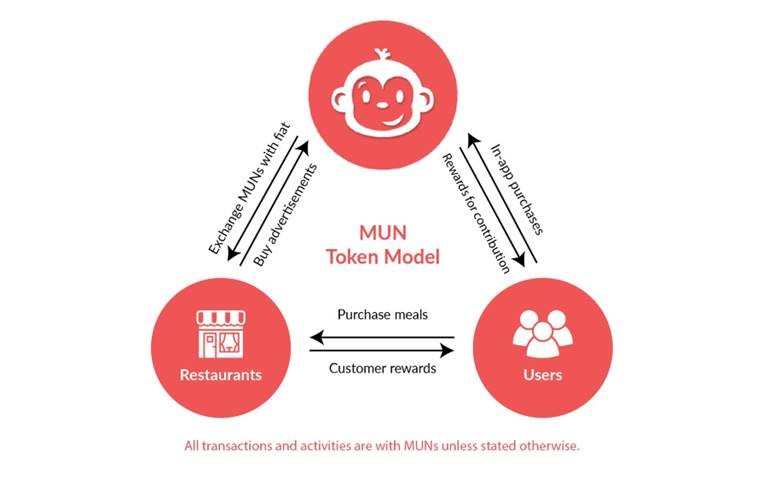 Users can use MUN to redeem rewards from restaurants within the app or they can transfer the tokens by selling them on an exchange. Users can generate rewards by:

In order to inspire users to hold their MUN, the firm will present a tiered rewards program. Tiers will be founded on the amount of MUN tokens a user is holding on the Ethereum blockchain. The higher the tier, the more rewards a user will receive for actions on the platform.

For instance, by writing a new peer-reexamined review a user could receive the rewards:

When the token system is activated in production, MUN owners will be able to exchange their tokens for promotion and advertising inside of the app. This promotion will go on in the form of a listed bounty, with the token awarded to the end-user as an incentive to write a review of the business and other social activity related to their experience at the restaurant. When the review is successfully completed, the end-user will get the bounty. “Since the direct function of advertising is executed in MUN, the value of the token is intrinsically linked to the value of the MUN coin,” says the press release. 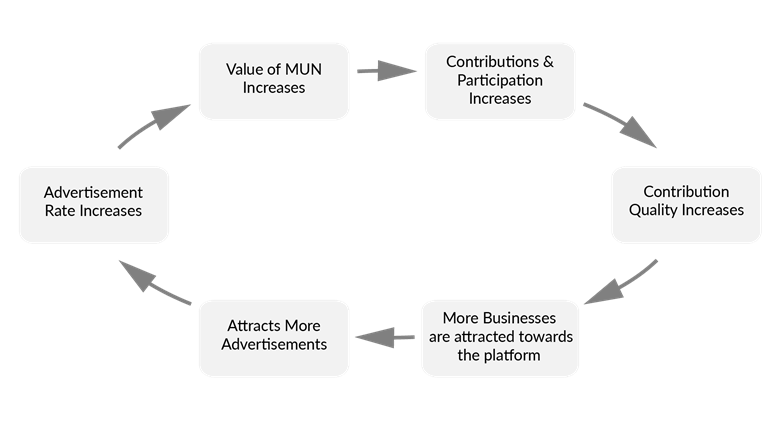 The subsequent structure will encourage reviewers to hold their MUN and contribute more to the community as they become more active. Reviewers will also be incentivized with special offers redeemable in MUN from restaurants and, ultimately, delivery services for dishes that have been reviewed on the platform. The outcome will be a robust, decentralized economy erected around a community of food lovers within the Munchee app.

The Munchee mobile app already has nice engagement on social media, including more than 3,500 Instagram followers and 16,000 Facebook followers. The firm intends to commence the presale of MUN tokens on October 15.

The firm will be revealing its blockchain platform in 2018. It also plans to integrate a wallet for users to redeem rewards and a special wallet for restaurants to buy advertising and generate special offers using MUN.

The Munchee Platform whitepaper can be downloaded from here.