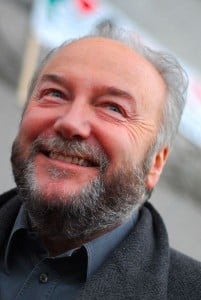 George Galloway at a Stop the War event, February 2007.

George Galloway, a former British MP, has proposed a blockchain-based public expenditure management system called the MayorsChain as part of his bid to become mayor of London, England in 2016.

In an interview published this week with the Felix Online, the student paper at Imperial College London, Galloway described the proposal, saying if elected, he would put London’s entire £17 billion budget online in real time on a blockchain that would allow the public to see what is being transferred in and out, and where funds are going.

“So for example if the mayoralty transferred today 50,000 pounds for such and such a service, members of the public instantaneously can say ‘I know that that same service could be provided much more cheaply’ and we’ve identified that we can make very substantial savings in the budget, perhaps 900 million pounds saving, just by public participation,” said Galloway to the student newspaper. “So we’d be the only government in the entire world whose entire budget was transparently online and influenceable and I think it might just set a trend.”

Using a blockchain to account for government budgetary allocations and spending would give the public the opportunity to know exactly how funds are being used and in real time, stated a MayorsChain press release issued July 1.

“We envision a future in which this model of transparent, unbreakable and verifiable contribution to the City Government, in combination with continuous participation of the crowd through active voting, is utilized to manage budgets that are public to be audited collaboratively by its citizens, who share the benefits and responsibilities collectively. We are calling this model, decentralized City governance by blockchain,” said Galloway in the press release.

The release noted that the decentralized nature of blockchains enables direct public participation in budgetary decisions more extensively and more secure than ever. Just as payments can be tracked securely and without needing to trust that no one has tampered with the data, the public may vote for proposals without needing to trust that the vote is fair. Moreover, following public discussion, anyone can present a proposal and hold a public vote on it, with the results preserved in a blockchain in secure and permanent manner for everyone to see.

“The result might be revolutionary,” said the press release. “Instead of governance being handled by several elected members and a handful of highly paid in-house, Blockchain Governance allows for it to be handled in a transparent and practical way by an open transparent assembly of voters, through a blockchain. This could be applied to the budget of any department of City Hall put on the blockchain. In a word, blockchains make direct democracy possible in ways that were not previously imaginable, and radically empower the public.”

Galloway is leveraging the technology features and expertise of Horizon – a Bitcoin 2.0 platform – and the Blocknet – known as the “internet of blockchains” – to gain knowledge of cryptography. In addition, Max Keiser, co-host of the financial news show the Keiser Show, is a candidate to become Galloway’s economic advisor. Keiser’s cryptographic fundraising system StartJOIN hosted a crowdfunding campaign for MayorsChain, which raised £848 by its closing date of July 17.

The MayorsChain website includes a white paper published this month that offers an argument for the “epoch-changing” significance of blockchain technology to governance, identifies some challenges to the technology’s application to governance, and explores the groundwork laid for a blockchain-based governance implementation.

The paper suggests that optimizing governance in a radical way, in which new production methods are enabled, is a matter of eliminating alienation, which significantly advances productive forces that affect governance ubiquitously as well as maximize the power of any merely contingent active forces.

The white paper acknowledges this is a daunting endeavor and a major technological challenge, even without accounting for countless lower-tier issues that would be encountered, including achieving group coordination and collective decision-making across entire populations, and in a manner that is at least similarly efficient to bureaucracy.

Still, the paper argues that blockchains do achieve this.

The trustless and decentralized properties of blockchains meet the alienation-minimization conditions outlined in the white paper, which states the public must completely determine the provision of public goods.

For public responsibility, this is a matter of putting the decisions about how, when, who, why, and what goods are provided under public control, says the paper. To do so is to decentralize control, as it is put in the hands of everybody. Related to this is the need to provide verifiably correct or transparent information to remove the possibility of misinformation bypassing the taking of responsibility by tricking people to act against their own interests.

As for public interest, the paper says, this is a matter of making it simple to access any information regarding goods-provision, and equally easy to play a role in determining the provision of public goods. There is also the matter of making information at hand verifiably correct, so that it would be impossible for whoever accesses it to have their interests hindered by doubts about the information’s veracity.

The document states blockchains maximally reduce the alienation of the following ubiquitous productive forces in governance: public interest, rights, ownership and responsibility. It adds that such systems would also do the same for the contingently active productive forces of public interest and responsibility; in this instance, doing so would inhibit their actions minimally, allowing production involving these forces to operate with maximal efficiency.

“Under traditional bureaucratic government, such forces are alienated in principle by the abstraction layer between the public and the government, and characteristically alienated in practice by queues, inaccessible information, non-machine-readable data, unverifiable information, and so forth,” says the white paper. “By removing the abstraction layer (that is, providing governance without a central government) and…removing all alienation in principle, blockchains represent a radical optimisation of the power of contingently active productive forces.”

The paper concludes that its exploration of blockchains as a governance technology fulfills the theoretical requirements discussed for the optimization of governance. “Blockchains possess properties capable of producing something that [report author Arlyn Culwick finds] hard to characterise as anything other than perfect [Culwick’s emphasis] governance. Should blockchain-based governance be implemented, there is every reason to expect the consequences to be an epoch-changing for governance as the individual revolution was for material production.”