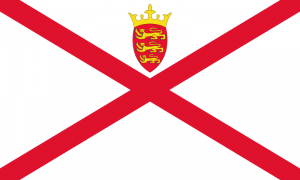 Flag of Jersey (Isle of Jersey, or officially the “Bailiwick of Jersey”)

Once a key tactical point in the brutal wars between the French and the English, the Isle of Jersey (a tiny, five-by-nine-mile island located in the channel off the coast of France) has found a new role in recent years as a tax haven for Europe’s wealthy. The semi-sovereign nation is home to a number of banking and taxation regulations that make it hugely attractive as a place to stash money against the prying eyes (and fingers) of world governments. A substantial portion of the island’s flourishing economy is its role as a provider of anonymous, largely untaxed offshore bank accounts.

Now, groups within Jersey are looking to expand that role by embracing Bitcoin as a new way of banking that is more compatible with its role in international finance. The advocacy group bit.coin.je has been campaigning for the government of Jersey to alter banking regulation to allow the banks operating within the country’s borders to accept and trade in Bitcoin as an official currency, and to allow citizens of Jersey to pay for civil services in Bitcoin.

The government of Jersey may be amenable to the proposition. The Jersey minister of finance, Philip Ozouf, was quoted by the BBC as saying that he wants Jersey to be an early adopter and leader in the area of Bitcoin technology.

Senator Ozouf said, “[This] is a sector that could hold significant opportunities for Jersey.  Our infrastructure of world-class financial services and digital expertise gives us the tools to be an early leader in the field. Innovation will be central to Jersey’s future prosperity. We are keen to support local businesses by helping to create a well-regulated and responsive environment for investment in the sector.”

Bit.coin.je’s representative, Robbie Andrews, suggested to the BBC that Bitcoin is an ideal fit for the Isle of Jersey. The anonymity, low transaction fees, and ease of use all offer major advantages for the banks that offer services on the Isle, and Andrews sees Bitcoin as a major feature in the island’s continued relevance in the decades to come.

“At the moment there is a big push for a digital industry in Jersey to grow and if you asked any technologist what is the one technology that fits between technology and finance, it would be a crypto-currency like Bitcoin,” said Andrews.