Despite gloomy market sentiments, the enduring appeal of blockchain has continued to attract entrepreneurs and enterprises seeking to leverage decentralized technology. As companies from various industries continue to report financial wins, it is more crucial than ever for investors to pause and ponder before committing to a project: Do these new ventures truly prove the value of blockchain for genuine use cases?

From mania to maturity

Though the initial blockchain hype captivated mainstream audiences, the emergence of projects that couldn’t prove themselves beyond their ICOs became a roadblock that paved the way for industry skepticism. Relying solely on the hype surrounding decentralized technology without consideration for its real-world applications is no longer adequate. As institutional players join early adopters, the ability to identify worthwhile projects that deliver actual industry impact has become more important than ever.

Assessing the real-world viability of a blockchain project is crucial to diminishing the effects of the initial crypto craze. It is only with time and experience that investors have been able to determine whether an idea truly has a place within an industry or application that would benefit from decentralized technologies and whether an idea is truly innovative and disruptive.

A commitment to preserving the integrity of blockchain technology is imperative, as the financial benefits to be gained are ubiquitous. However, as any investor would know, having a clear, well-informed investment thesis is crucial to achieving sustainable, long-term success in any project.

The recent surge in support from traditional financial corporations has reconciled technological innovations with industry-grade best practices, lending a greater sense of stability and legitimacy. With acquired experience from managing traditional assets, discerning institutional investors are focusing on results, particularly on use cases within specific industries. Granted, while there is a place for blockchain, to use it as a band-aid without proper thought as to whether it truly fixes a problem, only serves to hurt the industry’s hard-earned credibility.

The peak of crypto mania saw more projects and players looking for quick wins and investors at the time acted quickly in fear of missing out. However, the current bear market grants the luxury of time to newcomers as they seek to diversify their digital asset portfolios, allowing them to make better-informed decisions as they research and educate themselves on the complexities of blockchain. Today, impulsively jumping headfirst into blockchain initiatives is less of a likelihood.

Beyond a successful product, having a strong foundation and team supporting the project adds to the viability of an investment.

In looking to the future, as blockchain-specific skills gain greater visibility in both academic and professional spheres, one can expect to see an incoming generation of talent better prepared to tackle emerging challenges in the space. Almost half of the world’s top 50 universities, including University of California, Berkeley offer at least one blockchain or cryptocurrency course, equipping students with the right skills and exposure to research opportunities. Other universities, such as the National University of Singapore and their CRYSTAL (Cryptocurrency, Strategy, Techniques, and Algorithms) Centre make use of local academic communities to further research opportunities, opening a dialogue between researchers and industry leaders. Projects also actively engage with university communities by holding hackathons and workshops to provide training to students and developers looking to enter the blockchain space. As this continues, teams behind future projects will be better poised under the scrutiny of prospective investors.

However, experience speaks volumes. Investors will be in a better position to determine whether or not a project will succeed if they have a sound business plan, an identified or proven application of the technology, and a pioneering, strategic team. Only then will a project have the potential to emerge as a contender in a largely saturated landscape.

Plummeting prices and decreasing hash rates may dismay onlookers, but a bearish market can reveal which projects truly have purpose and value beyond that of arguments proposed in a whitepaper and initial fundraising efforts. As real-world applications of blockchain in industries such as finance, oil and gas, and government operations, continue to make news headlines, long-time investors and established newcomers can be assured of blockchain’s value and of digital assets as a whole. The market notwithstanding, there’s more to blockchain technology than market fluctuations and speculations on price –– it’s positive developments across industry verticals that make a difference in attitudes and point to a future where mainstream adoption of blockchain technology is hardly out of reach. 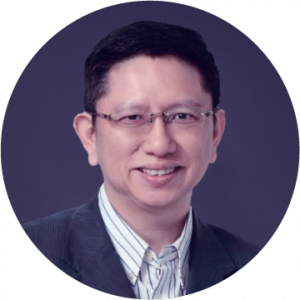 Roger Lim is a Founding Partner at NEO Global Capital (NGC), one of the world’s leading blockchain investment firms with over $400 million in assets.

An experienced angel and blockchain investor, Roger serves as an advisor to many successful ICO projects including Bluzelle, Qlink, CoinFi, Selfkey, Tomocoin, nOS, and Open Platform helping them to raise over $400M in funding.  A successful entrepreneur, Roger also founded Webvisions one of Asia’s largest managed hosting company in 1996.