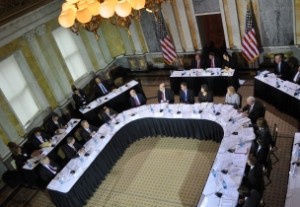 Third meeting of the Financial Stability Oversight Council on January 18, 2011, in the Cash Room of the Treasury Building in Washington, D.C.

The Financial Stability Oversight Council (FSOC), a group of United States regulators, highlights blockchain technology and bitcoin as threats to financial stability in its annual report published this Tuesday, reports CoinTelegraph. The report lists bitcoin and the blockchain under the section titled “Potential Emerging Threats and Vulnerabilities.”

Nevertheless, the report discusses a few risks associated with the technology. The report argues that since market participants have little experience with distributed ledger systems, some vulnerabilities may not be noticed until the systems are used on a larger scale. The report cites as evidence bitcoin’s trade confirmation delays and failures resulting from transaction speeds overtaking the rate in which they are added to the blockchain.

Another potential threat seen by the FSOC is the possibility of a group of system participants coming together to commit fraud.

“Similarly, although distributed ledger systems are designed to prevent reporting errors or fraud by a single party, some systems may be vulnerable to fraud executed through collusion among a significant fraction of participants in the system,” says FSOC in the report.

The section concludes with a discussion on the ways distributed ledger systems will change the role of centralized regulators within the financial sphere, including the need for coordination among various regulators.

The Stack explains the FSOC includes representatives from top federal agencies including the Department of Treasury, the Federal Reserve and the Securities and Exchange Commission.