Ethereum – the buzzed-about platform for supporting decentralized applications such as smart contracts – announced last Thursday the official launch of the first phase of its project, reported the Wall Street Journal.

In a company blog post about the launch, Ethereum CCO Stephan Tual said, “The vision of a censorship-proof ‘world computer’ that anyone can program, paying exclusively for what they use and nothing more, is now a reality.”

“How will the Internet work in the future? It will use Ethereum,” begins a brief introduction video to the project. The video describes Ethereum as “a planetary scale computer powered by blockchain technology,” on which applications run as programmed without any chance of downtime, censorship, or third-party intervention. “Ethereum is the secure backbone for everything from e-commerce to the Internet of Things, enabling transparent governance for communities and businesses, while keeping user communication secure,” says the video, calling the system “the world’s first zero-infrastructure platform, allowing your users to regain control over the management of their own funds and personal data.” 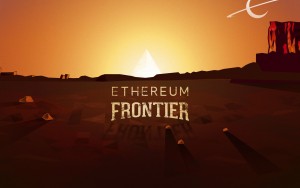 Dubbed “Frontier,” the initial phase is a bare-bones website that is up and running but is not exactly “live” yet, said Tual in an interview with the Wall Street Journal, published online Friday. “It’s in a thawing phase,” open to developers to start working on, said Tual. The phase is slated to go live some time this week, but with more than 70 teams already working on the platform, Tual said he is happy with it.

The Wall Street Journal reported that the first phase essentially opens up Ethereum’s blockchain to the public, but it’s only the beginning for the initiative. There are two more phases planned over the next year: “Metropolis” will include a user-friendly Web browser and “Serenity” will be designed to scale-up the platform. Should all go according to plan, a year from now there will be a well-designed, broad, public-oriented, decentralized platform that could support any number of applications and uses.

The newspaper noted that while Ethereum shares some technology used by the Bitcoin program, its design goal is not just to support a currency, but also any kind of application that could leverage blockchain technology.

The Wall Street Journal cited a May 2015 post written by William Mougayar, an advisor to the development team. “Ethereum is an alternative decentralized ledger protocol, not alternative cryptocurrency,” he wrote. “Ethereum’s ideological lineage contains as much BitTorrent, Java and Freenet as it does Bitcoin.”

Ethereum was first developed by 21-year-old Vitalik Buterin, who posted his idea for platform on GitHub in January 2014, a time before the notion of blockchain-based applications apart from Bitcoin had taken hold, said the newspaper. But the initiative soon sparked attention and support; last summer Buterin and his team held a crowd funding sale of the cryptocurrency ether that raised $18 million.

The Wall Street Journal reported that one of the applications being developed on Ethereum is called Provenance, which will allow retailers to track not only their products, but also the products’ materials, allowing them to certify their products as genuine and thwart imitations. Another participant, the startup Augur, is developing a prediction market that would allow individuals to place bets on, and tap the wisdom of the crowd, on anything from political campaigns to award shows and sporting events.